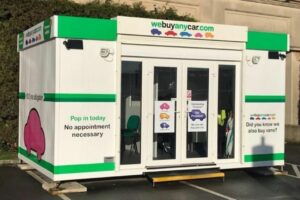 Electric cars: Man reveals how he was fined after charging car

Plans have been submitted for an online car retailer to build a new sales “pod” in a Morrison’s supermarket car park. We Buy Any Car aims to set up a shop in the car park at the store in Bolton. The plans handed to Bolton Council within the last week from WM Morrison Supermarkets give details of the scheme.

Supporting documents outlining the plans stated: “No cars are sold from these sites, all WeBuyAnyCar.com branches only purchase cars, and all cars are taken off site and sold at auction.

“The online service allows for the agreement of a mutually convenient collection time at the site where inspection of the vehicle and agreement of the sale will occur.

“There is a maximum of 10 cars on a site at one time, however this is more likely to four to six on a normal day.

“The sold vehicles will remain in a parking space until collection.”

They continued: “WeBuyAnyCar.com ensures that there is always space available for appointments within 10 car parking spaces and therefore through regular collection there is no overspill on to adjoining areas of the car park.

“The scheme seeks to revitalise the existing Morrisons car park by offering more choice to customers and generating new employment opportunities through the provision.

“WM Morrison Supermarkets hope that the advantages of this proposal as well as the overall benefits to the local community will be supported.”

And the scheme would see a reduction in spaces at the store.

The overall impact on the supermarket car park would mean a loss of 12 parking spaces, resulting in the capacity being reduced from 325 to 313 spaces.

The company said that if the plans were approved it would create two full-time jobs.

The application concluded: “WeBuyAnyCar.com offer a service which is highly valued by Morrisons customers and firmly aligns with plans to bring more popular and useful services to the communities that they serve.

“There is no disruption to their normal operation.”

Council planners are due to decide on the plans in the coming weeks.

It comes as used car prices began to level off after a record year that saw values rise a staggering 30 percent since 2021.

The wholesale price of used cars dropped by 5.9 percent last month as the cost of living, economic pressures and the war in Ukraine took their toll.

Despite prices still being far higher than the same period last year, it is a sign that the surge is likely to be ending.

He said: “Last month we raised concerns that sellers and buyers ran the risk of drifting apart in March, and whilst there was an initial positive step, the reality is that by the end of themonth things were drifting again, with the final published move into April falling well short of what the overall market was seeing.”

Meanwhile, eBay Motors suggested both the war and the cost of living in the UK threatened the used car market’s stability.