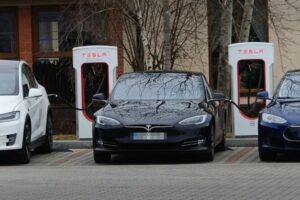 The staggering rise in the number of electric vehicles (EVs) purchased by Britons was underlined by new figures showing the UK second only to China in the amount of battery-powered cars bought in the past ten years. The research by experts at PartCatalog showed there were more than 1.75million EVs sold in Britain since 2010.

It also showed that between 2015 and 2020, yearly sales of electric cars have increased a massive 444 percent globally, going from around 500,000 sales to just shy of three million per year over the five years.

China leads the world in EV uptake with more than 4.5million cars sold over the past decade.

The country also manufactures more EVs than anyone else, with even US-based Tesla making more cars in Shanghai than they do in California.

But the UK is runner-up and way ahead of countries like Germany, the USA and France.

Even traditionally early technology adopters like Japan are way down the table.

Both China and the UK have seen their Governments hand large subsidies and grants to buyers to tempt them into buying electric vehicles, which is likely to be an influence on the amount sold.

However the Government here will shortly scrap the £350 grant for installing a home charger and last month lowered the grant for buying an EV from £2,500 to £1,500.

It was originally £5,000 when initially introduced but has been reduced every year since.

In terms of the most popular EV models, it was Elon Musk’s Tesla that dominated the list.

Tesla’s models, the S, Y, X and 3 took the four top spots in the most searched for cars globally, with only Audi’s E-tron taking the fifth place.

The California-based company had an astonishing 2021, especially compared to other manufacturers in the car industry.

Their sales doubled year-on-year as Tesla delivered just over 936,000 cars in 12 months.

In the UK the number of cars bought that are powered exclusively or in part by batteries increased 58.7 percent in a year according to the Society of Motor Manufacturers and Traders.

That accounted for one in six of all car registrations in 2021, with more EVs sold than the previous five years combined.

Diesel engine cars experienced an enormous drop in the last month of the year compared to 2020, with sales down 67.1 percent.

British buyers seem to be responding to the savings made by electric charging, against a backdrop of record petrol prices and a ban on fossil fueled cars in 2030.

However, there are serious fears that the UK charging infrastructure is not fit for purpose given the huge rise in the number of EVs.

Currently there is one charger for every 22 EVs registered in the UK.

Many people live in apartments or on streets with no off-road parking, which makes charging an EV impossible.

He added: “It needs the commensurate commitment of all other stakeholders.”