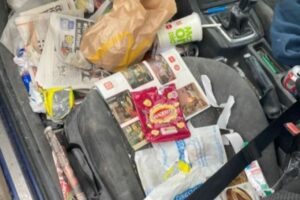 The UK’s messiest car has been shamed by police – with McDonald’s, Greggs and Fosters cans were strewn all over the interior of a Ford Focus pulled over in Kent. Road police were shocked by the state of the car.

Kent Police tweeted: “The odd sweet wrapper or dropped crisp from our colleagues on handover all of a sudden doesn’t appear so bad.

“The inside of a car stopped and seized today for no insurance, no MOT and no vehicle excise licence. #RSU GS”

Twitter users were appalled at the sight, with one writing: “At least it’s inside the vehicle and not been chucked out the window!”

Another added: “God if that’s what the car is like, I’d hate to think what it’s like at home!”

A third commented: “Looks like the front of an ambulance at end of a 12 hr night shift.”

While ‘Andy’ wrote: “Heck, you want to keep that pen out of the sun, that’ll go wrong..”

‘Olivia’ added: “At least the driver kept the rubbish in the car and didn’t ditch it onto the verge like most people in Kent seem to do.

‘Mick’ replied: “Did he have a waste carrier’s license…”

Other users weighed in on the car with ‘Andrew’ asking: “Is the passenger seat belt clipped into the driver’s seat belt socket to fool the alarm?”

‘Bad Car’ laughed: “Greggs, Macdonald’s, cheap crisps and Fosters?!? He’ll have a coronary long before he can drive legally, so definitely expect to catch him again.”

It comes just a couple of weeks after express.co.uk reported that a messy car could land drivers with a £1,000 fine.

Experts have now revealed that drivers should examine the state of their number plates and windscreens to keep safe on the road.

Jamie Louram, Halfords Car Cleaning Buyer, said: “Having an obscured number plate can land you in hot water, with fines of up to £1,000 if the letters and numbers can’t be seen.”

Mr Louram added: “You can also rack up a fine of £1,000 and even an MOT failure for incorrectly displaying your number plates, so double-check you’re following the requirements while you give your car a spruce.”

GEM Motoring Assist has previously warned plates cannot be covered by dirt as they must be readable at all times.

They said this was to ensure that registrations are readable to police officers at all times and can be seen by the automatic number plate reader.

Many Automatic Number Plate Recognition Cameras (ANPR) use plates to check whether the car has paid up-to-date tax.

However, if the registration plate is covered police officers will not be able to identify a vehicle, which can lead to drivers getting away with breaking the law.

Despite the risks, there are fears thousands of road users are oblivious to the rule and could be caught out.