Britain could see 1.3 million new drivers on roads this year after backlog for tests 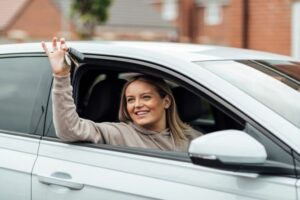 The year between April 2020 and March 2021 saw the fewest driving tests taken in 14 years, with less than one third of the annual average taking place. Fewer than 500,000 tests were taken in the past year.

The data from Direct Line suggests that as many as 2.8 million driving tests could be taken this year.

An average of 1.6 million tests are taken every year and with an estimated 1.2 million tests having been delayed, there could be a driving boom.

This means that across the UK’s 280-plus driving test centres, there could be nearly 8,000 tests every single day.

The data also shows that 2020/21 saw the highest pass rate in five years, standing at 49.8 percent, meaning this year is likely to see 68 percent more drivers take to the roads than before the pandemic.

While significantly fewer people were able to take their test, the pandemic pass rate was 49.8 percent, 3.4 percent higher than the five-year average (46.4 percent) and the highest rate since the data was first published.

This suggests those who did take their tests during the pandemic had benefitted from better preparation and were therefore more likely to pass.

Lorraine Price, head of motor insurance at Direct Line, commented on the figures, calling it “inspiring”.

She said: “It was a shame to see that learner drivers were so heavily affected by the pandemic as being able to drive is a pivotal part of a young person’s journey to independence.

“But it is inspiring to see that this has not deterred this generation of learners, who have had to be flexible and have adapted to this unique situation to achieve the highest pass rate in years.

“Overall, it’s extremely encouraging to see that the desire to get onto the road safely still remains despite the hurdle of the pandemic.”

Despite the lower number of tests taken, around 3.6 million people have been learning to drive since the pandemic began, nearly three quarters (72 percent) of whom were aged 18-34.