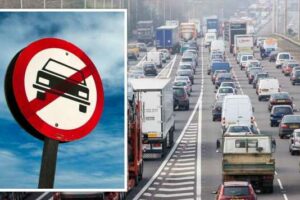 Climate charity Possible is launching a new annual challenge in hopes to encourage people to cut their car use. Going Car Free 2022 is launching in July and will work on persuading drivers to leave their cars at home for key journeys or even giving it up completely for the entire month.

The call for wider participation follows a pilot scheme that was run in January earlier this year across Bristol.

As an alternative to using cars, people are prompted to take more low-carbon transport or give up their cars completely.

Going Car Free will look to make a positive climate impact while giving participants the freedom to design their experience so no matter their circumstances, they can still take part.

This follows in the footsteps of other environmentally-themed, month-long challenges like Veganuary and No Mow May.

During the trial period in January, the 10 participants saved £8.78 a week on average between them.

Over the span of a year, drivers could save just over £450, something which Possible highlighted as a major saving during the cost of living crisis.

“After running our trial earlier in the year, it was clear that just sampling the car free lifestyle gave people an appetite to take it further.

“Going Car Free has the potential to have a huge impact on people’s behaviour and emissions.

“I can’t wait for more people to try out car free living and discover the joys of active travel, explore local shops and attractions and slash their climate impact.”

After the trial, all participants reported using their cars less or using sustainable modes for some journeys, with some even selling their cars.

Between them, they also saved 372kg of CO2 with Possible estimating that if 10,000 people took part in the scheme for a whole month, there would be a saving of 549 tonnes of CO2.

This is equivalent to the amount of carbon absorbed by over 26,000 trees in a year.

The challenge seeks to help people slash their car use, re-evaluate how large a component their cars are in their lives and set them on a journey to going car free.

Transport currently makes up 27 percent of all UK greenhouse gas emissions, something which the Government has been keen to point out.

The sale of new petrol and diesel cars will be banned from 2030, with a similar ban affecting new hybrid models expected to be introduced five years later.

As part of the proposals to reduce carbon emissions and meet the 2050 net zero target, the Government has also invested heavily in electric vehicles and the necessary infrastructure.

In addition to this investment, BP announced a £1billion boost to its rapid charging stations, with goals to build hundreds more in the coming years.