Brie Larson is Confirmed For Fast And Furious 10 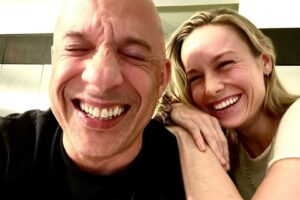 In an Instagram post by Actor Vin Diesel it was confirmed that actress, Brie Larson will be part of the upcoming Fast and Furious 10 movie, which is set to debut in May of 2023. This new installment of the Fast and Furious franchise marks 21 years since the original movie debuted in June of 2001.

Vin Diesel has been a part of the Fast and Furious movie franchise since the original movie. With work starting on the 10th movie it’s clear that his excitement for the franchise is still strong, based on the passionate words in his Instagram post which highlights their newest cast member Brie Larson.

Vin Diesel goes on to write in his Instagram post, “Yeah yeah yeah… you see this angel over my shoulder cracking me up, you say to your self “ that’s Captain Marvel”. Clearly, there is love and laughter in this image. What you don’t see, however, is the character you will be introduced to in Fast10. You have no idea how timeless and amazing she will be in our mythology. Beyond her beauty, her intellect… her Oscar, haha is this profound soul who will add something you might not have expected but yearned for. Welcome to the FAMILY Brie.”

The Fast and Furious franchise also recently announced that Jason Momoa will join the cast as the villain in the upcoming movie. Between Momoa and Larson, Fast and Furious 10 will include some heavy-hitting Marvel movie alumni along with the normal cast from previous Fast and Furious movies.

The cars from past films are legends. The Toyota Supra used in the original Fast and Furious film by actor Paul Walker sold at auction for $550,000.

Are you planning to go see Fast and Furious 10 when it debuts in May of 2023?