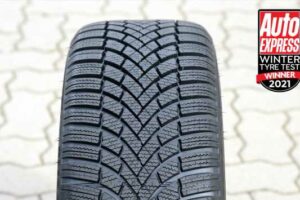 Victory in seven out of 11 categories, including strong wet and dry results, put Bridgestone’s Blizzak LM005 beyond doubt

There’s no compromise to the Blizzak LM005’s win this year and it easily romps to a second victory on the trot. As soon as the results started coming in, it was clear it would take something special to stop the Bridgestone.

Seven wins and a runner-up spot from 11 tests makes this a convincing success. It topped the snow braking test, but the winning margins meant the Continental had the edge on the white stuff. Other rivals also performed better in the deep-water aquaplaning tests, but elsewhere it was all Bridgestone.

The Japanese producer has certainly found something in wet braking because it was more than two metres ahead of the next best, with the rest of the field covered by a similar margin. The Blizzak had an edge for lateral grip, and like the Hankook, it felt it was pulling the car through turns, rather than always wanting to push wide. It didn’t feel so good in the dry where there was a softer edge, but the lap time was still fast.

Add in the fact it was the most frugal tyre on test and it’s a two-time winner.

The Blizzak LM005 is the undisputed champion, with a remarkable run of test wins that shows Bridgestone is able to combine excellent wet performance with fuel efficiency.

Customers rate this tyre highly, giving it an overall score of 4.5/5. Feedback focuses on impressive grip in winter weather and reliable stopping distances in wet and cold conditions.