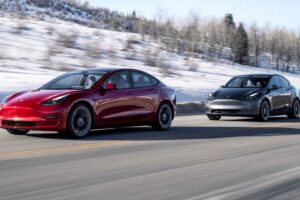 Brand loyalty is a powerful force in the auto trade. Automakers plow billions into ads that provide no information whatsoever about their vehicles, but are designed to make their brands look classy and cool. They also spend (some would say squander) substantial sums keeping ancient brands alive, because they (and even more so, their dealers) fear that letting any brand die a natural death could result in a loss of market share.

Above: A Tesla Model 3 and an Audi E-Tron in a driveway. Photo: EVANNEX

So, a new report from S&P Global Mobility, which found that brand loyalty has been falling across the luxury segment, must be causing some serious concern in corner offices around the world. We’re not talking about Buicks, Opels or Vauxhalls here—some of the auto world’s strongest brands (Porsche, Audi, Mercedes, Lincoln, Cadillac) have seen their rates of return buyers decline substantially over the last couple of years. Meanwhile, Tesla, the only major automaker that sells only electric vehicles, has logged an increase in brand loyalty.

What’s causing buyers to abandon once-beloved luxury brands? Well, the turmoil of the past couple of years provides no shortage of possible causes. The S&P report covers the time period from January 2020 to April 2022, and this was no ordinary time.

The pandemic, and the resulting supply chain problems, hit the auto industry like an earthquake followed by a tsunami. Some buyers faced waits of months for their desired models, and many of these may have switched to different brands simply because they had cars in stock. However, this can’t be the whole story. Visual Capitalist quotes a spokesperson for Mercedes-Benz who claims that “up to now basically worldwide, we had no issues running production.” And yet Mercedes’s brand loyalty declined by 7% over the time period studied.

The transition to EVs is also radically remaking the industry, and it may be tempting to say that this explains why Tesla has the highest brand loyalty of any auto brand (63% of owners say they would buy a Tesla again), and why it was one of only three automakers that managed to increase their brand loyalty (up 4% in the S&P’s study). However, the other two brands in positive territory were Maserati, which makes no EVs, and Genesis (Hyundai’s luxury brand), which only started taking US orders for its first EV in May. Audi and Porsche have been selling EVs for some time, but they lost brand loyalty, along with most of their competitors.

Conventional wisdom tells us that brand loyalty is closely related to vehicle reliability. However, Visual Capitalist reported each brand’s score in the J.D. Power 2022 Initial Quality Study (which measures the number of problems experienced per 100 vehicles [PP100] in the first 90 days of ownership) alongside the brand loyalty numbers, and there’s no clear correlation to be seen.

Maserati strengthened its brand loyalty by 4.3 percentage points, despite having the luxury segment’s worst PP100. Lincoln has an excellent PP100 rating, but it showed the third-highest loss of loyalty. And Tesla doesn’t exactly have a stellar reliability rating—its PP100 of 226 is considerably higher than the average of 199 for the luxury segment.

Three conclusions are pretty plain: 1) Brand loyalty in the luxury segment is on the wane; 2) Nobody has offered a convincing reason for the trend, and 3) Tesla must be doing something right.