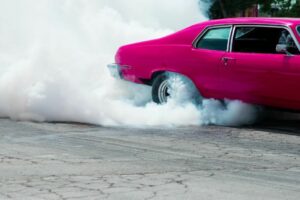 Several residents in Derby have accused so-called boy racers of staging street races using “road closed” signs to prevent anyone from interrupting. However, a lot of them are afraid of publicly speaking out as they fear the repercussions.

The boy racers have been spotted on the Infinity Park Way in Derby.

They have now become a persistent nuisance for local residents who remain fearful and are “losing sleep” over the noise.

One resident, who did not wish to be named, told DerbyshireLive: “I’ve seen them using road closure signs to stop people going down it.

“My partner got caught up in it once. It was very intimidating… there’s about 20 or 30 cars all lined up.”

Many residents have now followed suit and spoke about the issue anonymously.

They mentioned that they are worried about pedestrian and driver safety, as well as the noise.

Another resident living close to Infinity Park Way said: “It’s Sunday nights at around 9pm that it starts. We can hear them racing up and down, especially when we’re on the third floor of the house.

“It’s hard, especially when you’ve got work in the morning, it keeps me awake and it drives me mad. It seems as if we’re being picky but it also needs to stop for their own safety.”

She said: “It starts around 8pm or 9pm and will go on until about 11pm at night. It’s hard to get the kids to sleep especially in summer because we want the windows open at night.”

Another local named Ranjit Sandhu added: “You can hear the engines and them racing back and forth but it doesn’t really bother me.

“I go to sleep fairly early because I’m an early morning runner. I know there’s been some police presence.

Micheal Allsop, who lives nearby, described the noise as a “nuisance” and “very annoying”.

Several residents have also now claimed that speed cameras could be the best solution to the problem.

One of them said: “I think speedbumps would only cause traffic to just back up. Cameras need to be put on the road for everyone’s safety.”

However, according to several people living close to Infinity Park Way, the area has been quieter in the last four weeks.

Inspector Aaron Shaw, who is in charge of policing in the local area, said: “We know that driving in an anti-social manner cannot only be dangerous for those involved and other road users, but it can cause a significant nuisance to other members of the local community, and earlier this year we were seeing regular reports of calls surrounding anti-social behaviour at so called car meets in the Infinity Park area, but since May this year these calls have significantly reduced.

“The majority of car enthusiasts want to meet because they are passionate about their interest, however we have had occasions where there are a minority who cause disruption and put members of the public at risk.

“As part of our plan to target these concerns, officers are in the process of identifying and contacting drivers from across the country to issue warnings around their manner of driving and we continue to work proactively with those who have a legal right to meet in public areas, while disrupting those whose behaviour becomes anti-social or criminal, and taking necessary action.”

He continued: “Alongside our Roads Policing unit, officers will continue to monitor, respond and deal appropriately with reports of anti social or nuisance driving, and we would encourage people to report their concerns to us, or if they have any information, they can also give that anonymously through Crimestoppers.

“Organisers of car meets must get the permission of the landowner or local council before hosting events, who have powers to close roads if found appropriate. We would also encourage owners to contact the police and work with us so that we can prevent anti-social behaviour, serious injuries or potentially deaths caused by unsafe driving.”