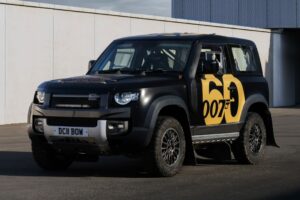 Land Rover has entered a special 007-liveried Defender 90 into the North Wales leg of the 2022 Bowler Defender Challenge to celebrate the 60th anniversary of the James Bond film franchise.

Prepared by the brand’s high performance Bowler division, the rally-prepared Bowler Defender Challenge features huge gold numbering on the sides and the roof, all set against the iconic 007 logo. As a final flourish, the name of every Bond film has been written in gold lettering on the bonnet and tailgate.

Piloting the Bowler in Wales will be Mark Higgins, a three-times British Rally Champion and Bond stunt driver, who’ll be partnered with co-driver Claire Williams. Higgins has been at the wheel in four James Bond films – Quantum of Solace, Skyfall, Spectre and the most recent film, No Time to Die. He’ll also have plenty of experience of the new Defender with the car featuring in a key car chase in the latest Bond film.

Higgins thinks the 007 Defender can perform well in the Welsh forest, “The New Defender is a tough and capable vehicle when it leaves the production line and I’ve seen it perform really challenging stunts while on the set of No Time To Die. With the race ready enhancements made by the Bowler team and with Claire by my side we are confident we can have a great result.”

As for the Bowler Challenge itself, it’ll be the same as the one we recently drove, complete with 296bhp 2.0-litre 4cyl turbo petrol engine sending power to all four wheels. The 18-inch wheels are wrapped in all-terrain tyres, plus there’s a bespoke suspension system, additional cooling and a fully integrated roll cage, which could come in handy if there are any dramatic Bond-style rolls.

Land Rover and James Bond have a long history, dating back to the 1983 film Octopussy that featured a unique first generation Range Rover convertible. And of course the latest instalment, No Time to Die, starred plenty of current Defender’s and inspired this Land Rover Defender V8 Bond Edition.

Check out the latest Land Rover news and reviews here