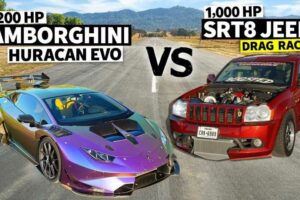 The Huracan features a bolt-on twin turbocharger system that fits on the stock V10. The setup delivers 1,200 horsepower (894 kilowatts) to the rear wheels. The front portion of the all-wheel-drive system is broken, leveling the playing field between the Lamborghini and the beastly Jeep.

The Huracan is facing off against a twin-turbocharged, fully built 6.1-liter V8 in the Jeep. It produces just over 1,000 horsepower (745 kilowatts) that routes to all four of the drag radial tires.

The first race is a simple head-to-head bout that sees the Jeep jump the start. The Lamborghini is right behind it but unable to catch up. The Jeep wins by two car lengths. The second race gives the hit to the Lamborghini, which launches off the line ahead of the Grand Cherokee SRT8. The Jeep cannot catch up, allowing the Lamborghini to cross the finish line first by several car lengths.

The third and final race between the two is another straight head-to-head matchup. The Jeep gets a great start over the Lamborghini, gaining a sizable lead, but the Jeep weighs nearly 5,000 pounds (2,267 kilograms), and the lighter Lamborghini is able to catch up. The Italian supercar closes the gap and passes the Jeep just before the finish line. The Lamborghini wins by a car length.

The Jeep makes a lot of power for a crossover, especially one from 2006, but today’s family haulers are quick. They can keep up with supercars and deliver supercar levels of power and performance. The high-powered models are helping automakers market crossovers and SUVs to consumers who are flocking to the vehicles.