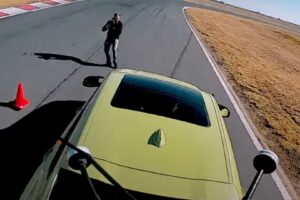 Driving has enough challenges, even when you have both hands on the wheel and your head on a swivel. But what happens when you switch perspectives like in a video game? The driving gets even harder, which is all on full display in a new

The publication took its tech team out to the race track for a unique challenge – driving a BMW X4 M in third-person view. The SUV has an external camera looking over the vehicle’s roof, recreating the video game-like viewing experience. At the same time, the drivers wear a VR headset displaying the camera’s view. It’s attached to a tall pole on the back of the SUV. The contestants were tasked with navigating the low-speed obstacle course and doing it while answering questions about the publication and mundane things like which month have 28 days and which planet is closest to the sun.

The third-person view creates a big disconnect between the driver and the vehicle. It has to be strange to feel the SUV roll from side to side but have no visual indication of the motion. Driving from a third-person view in video games is far more manageable, but the games are designed to smooth over that disconnect.

The contestants destroyed four cones, and the crew lost three GoPro cameras. They also almost lost a camera person when one contestant barreled toward the finish line too quickly, missing the parking box and nearly hitting the camera person, who had to move out of the way to prevent the SUV from hitting them.

The BMW doesn’t get the opportunity to use all of its potent powertrain’s potential in the third-person-driving challenge. The obstacle course and nature of the challenge kept speeds to a minimum, leaving the SUV’s twin-turbocharged 3.0-liter inline-six engine with little to do. It cranks out 503 horsepower (375 kilowatts) and 479 pound-feet (649 Newton-meters) of torque, and you’ll have to watch another video to see it in action. All-wheel drive is standard on the SUV, but it’s not a feature the contestants had to use often.