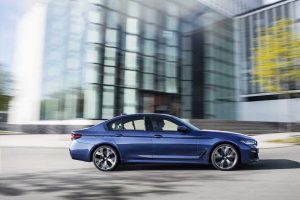 Not much about BMW screams “Pay for what you need,” but the automaker will test that idea soon.

BMW said cars built after July 1 will feature the updated tech, and that BMWs equipped with the automaker’s latest operating system (iDrive 7) would receive the upgrades via an over-the-air software update.

The automaker described how soon its cars will offer new owners app-like, in-car purchases for features and driver-assistance systems that may not have been originally included in the car. Those systems may include adaptive cruise control, traffic-jam assistance, adaptive headlights, or even heated seats. BMW said it will offer some of those services for a one-month trial, and then offer subscription terms for one to three years. Some BMWs already offer similar features, but those embedded systems required visiting a dealer for activation. Owners now can decide when to turn those systems on, and for how long.

BMW says the upgradable items will vary by region and car, but said software and hardware functionality would be included. A spokesman for BMW didn’t immediately comment on this story.

The automaker also previewed its newest navigation system, which will use cloud-based route calculations and provide contextual services such as nearby restaurants and shops, including reviews, and in some places, available parking. BMW has offered parking services on some of its cars, including the 5-Series sedans, for more than a year that includes payment and available spaces. Nearby charging stations and their availability also will be displayed.

Wireless Android Auto compatibility will arrive on some BMWs soon, too. The automaker added the feature and said it would support turn-by-turn navigation assistance in the digital instrument cluster and head-up display.