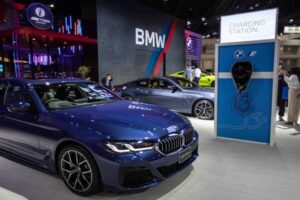 Richard Hammond has ruined every supercar he has driven

With more than 22 billion views, BMW is by far the most popular luxury car on the online video platform. The German car manufacturer more than doubled the second placed luxury car based on views.

In 2019, they launched a dance challenge entitled #THE1Challenge, which allowed users to showcase their BMWs as music played in the background.

Audi came in second with an impressive 9.3 billion views.

The research from Dick Lovett, shows that Jaguar came in third with six billion views and Porsche in fourth with four billion views.

The lowest ranked luxury automobile maker on the list was Aston Martin with a comparatively small 394 million views.

A spokesperson for Dick Lovett said: “BMW is the most popular car brand on TikTok, with an incredible 22 billion views on the app.

“BMW as a brand has been quick to embrace the social media platform, creating their own hashtag challenges to promote their vehicles.”

Locals furious as village is overrun with tourists’ vehicles [COMMENT]

In terms of the most popular model of car, the Audi TT boasts an impressive 5.5 billion views.

The Aston Martin DBS is the second most popular car model with 1.6 billion views.

The DBS is the car of choice for James Bond and has found millions of fans on TikTok.

This has been helped by the fact that Aston Martin have their own TikTok account for their F1 team, which boosts their numbers and their fans.