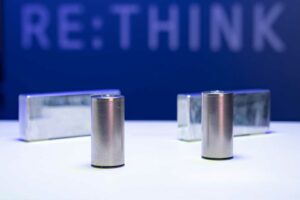 BMW is busy working on its next-generation electric vehicles, which will begin arriving in the middle of the decade. Part of what the automaker calls Neue Klasse (New Class) – a new platform and family of new technologies – are new batteries that are going to offer up to 30 percent more range compared to BMW’s today models. We’ll talk about the numbers in a minute but first, let’s see the company’s new battery tech.

For the Neue Klasse, BMW will introduce its sixth generation electric drive technologies, which will use new batteries. The Bavarian manufacturer will fundamentally redesign the cell format and cell chemistry of its batteries switching to round cells designed especially for use in vehicles based on the Neue Klasse architecture. These new round cells will replace the prismatic cells BMW is currently using.

Taking a deeper look into the design of the new battery cells, the company says they will have a diameter of 46 millimeters and two different available heights depending on their application. The cell chemistry will include more nickel content on the cathode side, while the cobalt content will be reduced. On the anode side, in turn, the silicon content will be increased and this new chemistry will result in more than 20 percent higher volumetric energy density.

Among other changes, Neue Klasse will also introduce an 800-volt electrical system, further optimizing how the energy is supplied to DC fast charging stations. BMW promises this will reduce the charging times from 10 to 80 percent by approximately 30 percent.

Speaking of charging, it’s also worth mentioning that the firm also promises 30 percent more range thanks to the new batteries in its range-topping vehicles. Also – and that’s perhaps far more important – the automaker estimates that battery price will be reduced by up to 50 percent compared to the current fifth-generation batteries.

To secure the production of batteries needed for the Neue Klasse-based vehicles, BMW will open new battery plants in Europe and China with a projected total annual capacity of up to 20 GWh. Two more cell plants will be built in North America but there are no partners nominated yet.