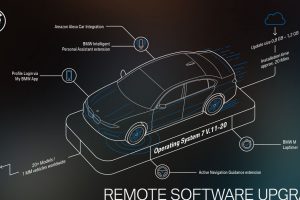 BMW Operating System 7 has been given another update, with version 11/20 rolling out to over one million vehicles worldwide across more than 20 models as of February 22, 2021. As with previous over-the-air (OTA) software updates, customers in their respective countries will be notified when the update is made available, with new features to enjoy once installed.

First up, the Amazon Alexa voice assistant will have a deeper integration in BMW’s system, allowing owners to access a variety of functions like editing shopping lists, accessing the latest news, playing music and even control smart home devices from their BMW. For now, Alexa integration is being made available for Germany, Austria, the United Kingdom, Spain and Italy, with more countries set to join the list later on.

There are changes to BMW driver profiles too, as users can now assigned a personalised profile photo, which can be synchronised easily using the My BMW app. On a related matter, a personal driver profile can now be transferred to other BMW cars, including rental vehicles, by simply scanning a QR code using said app.

All preferences like climate control and navigation settings will then be automatically imported into the vehicle along with the driver’s personal settings. Should you want to remove all personal data when returning a vehicle, all associations with the My BMW app or BMW ID will be cleared when resetting the vehicle to factory settings. Next up, there’s the BMW M Laptimer, which pulls telemetry data (accelerator position, rev speed, G-meter) from onboard sensors, and track drivers can also record their lap times, driving time and distance travelled. All that data is compiled into a user-friendly format for later analysis.

BMW’s own Intelligent Personal Assistant also gains the ability to give passengers a taste of the sound made by BMW M models. A novelty feature at best, you can now pose the question “Hey BMW, what does a BMW M8 sound like?” which “prompts the arrival of a stirring aural accompaniment to sports performance,” the company says.

For owners in France, Portugal and Spain, an Active Navigation feature is now available as an extended function of the Steering and Lane Control Assistant. This function suggests making a lane change based on the travelling route. If a gap in the traffic is detected, Active Navigation will wait until the vehicle is level with the gap before prompting the driver to change lane. Last but not least, the digital owner’s manual in relevant models have been updated with the latest information