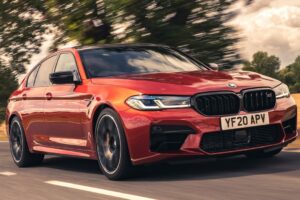 The legendary BMW M5 executive express is now available in Competition form only, featuring even more power and driver focus

The latest version is known as the F90, and was revealed at the Frankfurt Motor Show in Autumn 2017. UK dealers began offering the new M5 for sale in early 2018, with deliveries starting in the Summer, while you can now only order the M5 in Competition trim. Drivers considering buying one will find an enticing array of M5 rivals vying for their cash – the line-up includes the Audi RS7, Mercedes-AMG E63 and Porsche Panamera.

Of its many stand-out features, it’s the new M5 xDrive four-wheel drive powertrain that really sets the 2018 M5 apart from its predecessors. For many BMW owners, the brand’s trademark rear-wheel drive handling has been venerated with an almost religious fervor, but the M5 had so much power (initially 592bhp) that four driven wheels are the only way to get it onto the tarmac. The M5 also features an automatic transmission that’s said to be more robust than its predecessor’s dual-clutch set-up, but shift times are comparable.

BMW introduced a facelift for the M5 in 2020, with minor exterior cosmetic changes echoing the updates applied to the rest of the 5 Series family, while other revisions included new metallic paint finishes, 20-inch twin-spoke alloy wheels and a new 12.3-inch digital instrument cluster and a larger infotainment screen.

The latest car’s engine is a development of the twin-turbo V8 in the last model, with the current M5 Competition (the only UK model currently available) producing a heady 616bhp. But, underneath all the go-faster gear, the M5 has all the attributes of a highly-specified 5 Series saloon. Standard spec includes a 20GB hard drive, Digital Cockpit dashboard, four-zone climate control, adaptive LED headlamps, adaptive cruise control, full leather interior and an M Sport steering wheel on the comprehensive list of goodies.