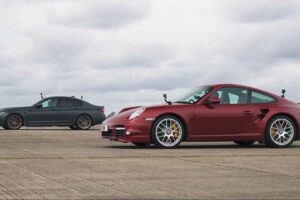 The BMW M5 CS sits at the top of the 5 Series lineup. It’s large, luxurious, and brimming with horsepower and torque, but is it quicker than a decade-old Porsche 911 Turbo S? A new Carwow video gets to the bottom of that question by putting the super sedan against a 997.2-generation Turbo S.

The BMW weighs 4,023 pounds (1,825 kilograms), which is more than the Porsche’s 3,494-lbs (1,585-kg) curb weight, but it’s also more powerful. It’s powerful enough to get the BMW off the line ahead of the Porsche and keep it there through the finish line. The M5 gets a slightly better start, and it’s enough to keep the 911 in second place. However, the Porsche was right on the BMW’s bumper, crossing the finish line in 11.2 seconds compared to the BMW’s 11.1-second time.

With both cars in their comfiest settings, the first rolling race is another victory for the BMW. The BMW accelerates more quickly than the Porsche, but that difference is reduced in the second rolling race when both cars are in their sportiest setting with the gearboxes set in manual mode. The BMW still wins, but the Porsche isn’t as far behind.

The final test between the two demonstrates their stopping power. The BMW is heavier, which is a disadvantage in this test, but the car’s brakes are able to bring it to a stop several car lengths behind that Porsche, which required a lot more distance to come to a complete stop.

The Porsche 911 Turbo S 997.2 was a bonkers car a decade ago, but it still has the chops to keep up with today’s performance machines. It might not have won one test against the BMW, but the 911 Turbo S still impressed.