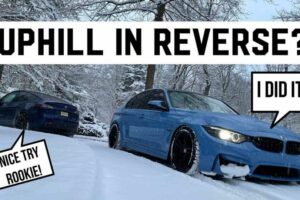 The story about the Tesla Model Y rescuing the BMW M3 that was stuck in the snow in its own driveway was one of the hottest ones.

We had a great example of how an electric car with all-wheel-drive, equipped with all-season tires was superior to a sporty rear-wheel-drive BMW M3 equipped with winter tires when it comes to driving uphill on the snow. The stock Tesla was able not only to go up but to go up from a standstill and even tow the BMW M3 uphill.

A lot of questions emerged after this report, especially since the rear-wheel-drive Porsche 981 Cayman with winter tires also failed the test, while the front-wheel-drive Hyundai Tucson with used, all-seasons tires had no issue with the driveway.

Tommy L Garage conducted additional tests suggested in the comments with 4 inches of fresh snow on the driveway. The Tesla Model Y LR AWD had no issue once again, despite it being equipped with all-season tires.

In the case of the BMW M3, Tommy L Garage first addressed the questions about the tires, showing that they really have decent tread.

The next thing was to try with traction control off (like in the previous episode). The car stuck right away at the bottom of the snowy uphill. With the traction control on, the rear wheels were just spinning uselessly.

How about starting in second gear? Well, it did not help. Even with some momentum.

So, is there any solution for the BMW M3 that would prevent it from being stuck until Spring?

Well, the last resort for the BMW M3 is to go in reverse and basically turn the car into a front-wheel-drive equivalent.

However, even this solution – despite winter tires – does not match Tesla, because it works only when the car speeds up at the bottom. No option to go up from a standstill.

Well, that should be enough to conclude the big weakness of the rear-wheel-drive car on the snowy uphill, although it would be nice to see a rear-wheel-drive Tesla included in the test as well.

Of course, having an all-wheel-drive vehicle does not solve the winter driving issue and all-season tires are just a basic solution for conditions that are not too challenging, as well as low speeds and flat streets. To stop the car in a shorter distance, and for a better driving experience and to prevent it from sliding down from a hill, proper winter tires would be recommended.