BMW M3 Touring Spied On The Streets Around The Nurburgring 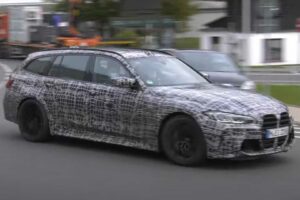 In the era of (mostly) electrified high-riding family vehicles, the announcement from BMW that the first-ever M3 wagon is already under development was a real breath of fresh air. The performance vehicle is currently in the testing phase, and we’ve already seen it in many spy photos and teaser images. Interestingly, it seems that the automaker is using just a single prototype for its R&D purposes.

We have a new spy video to share with you, and it shows an M3 Touring driving on the public streets around the Nurburgring track. It’s a fully camouflaged prototype and the registration plate confirms this is the very same prototype that we have spied on several times in the past. Also, this seems to be the same car BMW teased in September this year.

Unfortunately, there’s not much to be seen here. The entire body of the test car is covered with a camouflage foil, though, the headlights and taillights are clearly visible. This shouldn’t come as a surprise, as these units will be shared with the M3 sedan and 3 Series wagon, respectively. It’s too early to judge, but for now, we like what we see. That doesn’t seem to be the case with everyone, however, as many BMW fans have already expressed their mixed feelings about the front end.

One thing we know everyone will totally enjoy is the performance of the M3 Touring. Under the hood, it will have a 3.0-liter twin-turbocharged inline-six engine, delivering up to 503 horsepower (375 kilowatts). An available all-wheel-drive system will put the M3 Touring on par with the Audi RS4 Avant, and there will also be the option for a manual gearbox. It all looks too good to be true, but it is actually happening very soon.

Europe will get the new M3 wagon at some point next year. Unfortunately, it won’t be sold in the United States.