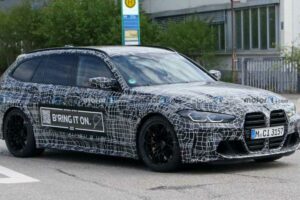 Friends, the BMW M3 Touring is almost here. We promise it’s coming soon, just weeks away if the rumor mill is accurate. Considering the plethora of official BMW videos and teasers in recent weeks showing various aspects of the hot estate, we have little reason to doubt it will arrive in June. This new selection of spy shots offers further evidence of an imminent debut.

This prototype wears a body-hugging camo wrap, and as far as we can tell, there aren’t any false panels beneath it. This is the same setup we’ve seen in BMW teaser videos, though the photos offer a crisp, close look. Neither the M3 nor the 3 Series wagon are mysteries, but the combined formula is still something we’re anxious to see in full splendor. Considering BMW is parading prototypes with branding to B’ring it on along with a QR-code (which links to a BMW story about the M3 Touring), we suspect the automaker is anxious to reveal it.

Speaking of B’ring it on, it’s believed that BMW will seek a Nürburgring record with this, its first official M3 long roof. Rumors say it’s already turned a time in the range of 7 minutes 30 seconds, which would be enough to comfortably take down the Mercedes-AMG E63 S in the wagon category. It’s the current champion with a time of 7 minutes 45 seconds, so if BMW’s unofficial time holds up, the M3 will have no rival in the world of fast estates. At least, on a race track.

These spy shots also offer a look at the M3 Touring’s interior, though it’s not exactly presented in a finished state. The dual digital screens are in plain view, but without housings to dress it up, there’s a rough-around-the-edges vibe. Teaser videos from BMW show pretty much the same layout you get in the M3 sedan, though obviously there’s a bit more space at the back to haul your goods. We bet a set of dedicated wheels and tires for the track fit wonderfully under the hatch.

Will this be the last set of M3 Touring spy photos we see before the camo wrap comes off? It’s hard to say, but BMW will likely share a few more teasers before the wagon goes official.