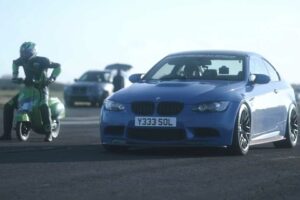 Our drag races hub currently consists of more than 500 articles, featuring countless different combinations of vehicles. There’s a good number of races between a car and a bike, but we’ve never seen a battle like this one. It is definitely one of the weirdest combos ever and this makes it even more intriguing. Let’s see the contenders first.

On the right is a BMW M3 from the E92 generation. It’s not a stock example though, and some of the modifications include a custom exhaust system, a new cold air intake, and a stage two ECU remap. The output is about 430 horsepower (316 kilowatts), channeled to the rear wheels only via a seven-speed dual-clutch transmission. The gearbox is probably the weakest link of this performance coupe, though, with a weight of about 3,527 pounds (1,600 kilograms), it has a very decent power-to-weight ratio.

On the left, in turn, is a Vespa scooter. At a glance, this combo doesn’t make a lot of sense, but bear in mind this is a tuned Vespa with a 150-cc single-cylinder engine delivering 43 hp (32 kW). Roughly, this is ten times more than the factory output and there’s also a new five-plate drag clutch, a larger carburetor, larger wheels, and more. With the rider, the weight of the Vespa is around 353 lbs (160 kg). Or, put simply, it has ten times fewer ponies and weighs ten times less than the BMW M3. The scooter drives its rear wheels through a four-speed transmission.

The video at the top of this page is almost 13 minutes long and after the introduction of the vehicles and their drivers, there’s a series of drag races. First, a classic quarter-mile race from a standing start followed by a roll start drag race. Both categories are under the best-out-of-three rule and the performance of the vehicles is recorded with professional measuring equipment. With exactly the same power-to-weight ratio, these two machines are definitely worthy of your attention.