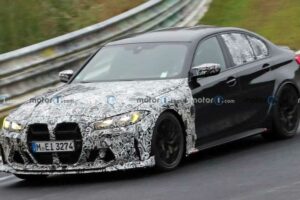 The BMW M3 CS will be an even more hardcore take on BMW’s iconic sports sedan. This one is spending some time on the Nürburgring Nordschleife for development on the track. The engineering team only bothers to camouflage select portions of the car.

In front, the CS has a more aggressive fascia than the standard model. A splitter sticks out from below the nose. There are also revised inlets there. The grille has larger openings and loses the existing horizontal slats.

The development team also covers up the rear windows. According to a rumor, the M3 CS has a pair of bucket seats in the back, and the company might be trying to hide them on this vehicle.

At the back, this M3 CS wears a small spoiler on the rear deck. It has quad exhaust outlets in a position near the center of the tail.

According to a rumor, the twin-turbo 3.0-liter inline-six makes 540 horsepower (403 kilowatts) and comes exclusively with an automatic gearbox. The sedan would only be available with all-wheel drive. To save weight, BMW would make extensive use of carbon fiber, including possibly for the hood and roof.

The M3 CS will allegedly go into production in March 2023. BMW will keep it a limited-run product by only building the model until February 2024.

We might see the M3 CS debut before the end of the year. If not, expect the unveiling to be in early 2023.

If the M3 CS isn’t hot enough for you, BMW is also working on the M4-based 3.0 CSL. It offers a six-speed manual and rear-wheel drive. Power is reportedly more than 550 hp (410 kW). The brand is allegedly making very few of these vehicles, possibly as low as 50 examples. The price for them could be as high as €750,000.

According to a recent rumor, BMW is working on a CS or CSL variant of the M2, too. Details about it are still scant, but the engine might make 473 hp (353 kW).