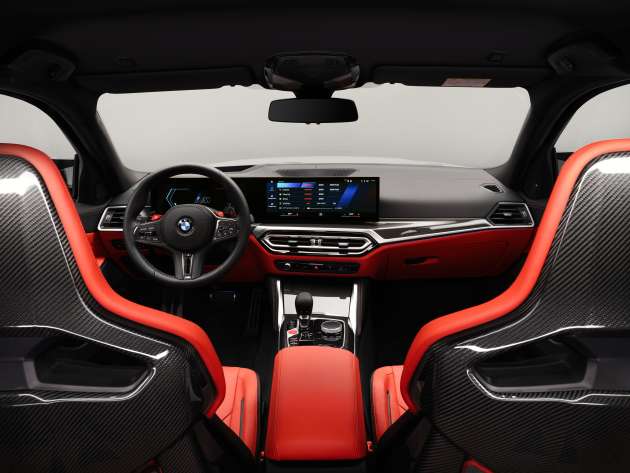 Aside from revealing the facelifted 3 Series, BMW has also details a litany of range-wide tweaks for the summer of 2022. The model year change brings new features and engines across Munich’s lineup, many of which have been plucked from its newer cars.

The biggest news is that the new Curved Display, a Mercedes-aping widescreen panel, is now offered on the 2 Series Coupé and the M3 sedan. First seen on the iX, it incorporates larger displays – a 12.3-inch digital instrument cluster and a massive 14.9-inch centre touchscreen – covered by a single piece of curved glass.

It also runs on the latest BMW Operating System 8 that features crisp new graphics, customisable instrumentation and climate controls integrated into the touchscreen. On both these cars, the new screens are accompanied by slimmer centre air vents – jettisoning the built-in air-conditioning switchgear – and a toggle-style gear selector, both of which are lifted from the refreshed 3er.

Strangely, the M4 misses out on the new display panel, despite being a two-door version of the M3, although it does get new M graphics on the bonnet and boot lid. As for the M3, buyers can now specify the Innovation Package (including the Driving Assistant pack, keyless entry and Laserlight headlamps), a personal eSIM, Sensatec faux leather dashboard wrap and anthracite rhombic aluminium trim, while the Qi wireless charger makes a comeback. A new Frozen Pure Grey metallic matte paint option has also been added.

The 2 Series Coupé is another recipient of the Innovation Package (with park assist, a head-up display, additional infotainment functions and adaptive LED headlights here), plus a Comfort Package that adds heated and power-adjustable front seats.

The update also introduces two new variants bookending the range – the 218i with a 156 PS/250 Nm 2.0 litre turbocharged petrol four-cylinder and the rear-wheel-drive version of the M240i, the latter retaining the 375 PS 3.0 litre straight-six of the all-wheel-drive car. All models now get paddle shifters as standard, as the conventional gear selector has been eliminated. 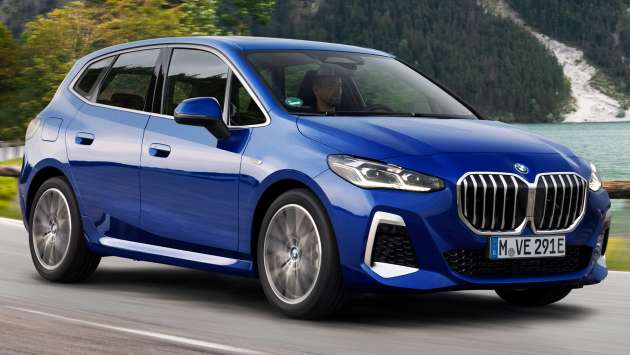 Moving on to that car’s front-wheel-drive MPV sibling, the 2 Series Active Tourer can now be had with two plug-in hybrid variants. The 225e xDrive pairs a 136 PS 1.5 litre three-cylinder with a 109 PS electric motor to deliver a total system output of 245 PS, while the 230e xDrive bumps those figures to 150 PS, 177 PS and a whopping 326 PS respectively. As their names suggest, both these cars come with all-wheel drive.

Under the skin, a 14.9 kWh lithium-ion battery provides a useful boost in electric range over the old 225xe to between 82 and 93 km on the WLTP cycle. It also now supports up to 7.4 kW of AC charging power, filling the battery in two and a half hours. Another new variant is the mild hybrid 223d xDrive, which mates a 197 PS/400 Nm 2.0 litre turbodiesel and a 19 PS/55 Nm 48-volt integrated starter/generator.

The rest of the updates are fairly minor. The 4 Series Gran Coupé gains a RWD version of the 374 PS mild hybrid M440i, as well as a 440d xDrive with a 286 PS/650 Nm 3.0 litre six-pot. Still no Curved Display here (unlike the electric i4), but M variants of the 4er can now be optioned with the M Sport Pro pack that throws on gloss black exterior trim, darkened headlights, red brake callipers and M tricolour seat belts. The Coupé and Convertible models also get new Skyscraper Grey paint. 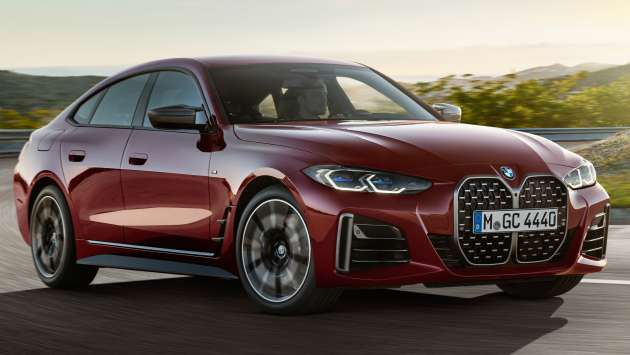 Elsewhere, the 5 Series and 6 Series Gran Turismo are available with a more extensive M sports package that adds the Sport version of the ZF eight-speed automatic and paddle shifters, along with a boot lid spoiler on the 5er sedan. The colour options have also broadened to include Skyscraper Grey and, on the 5 Series, Arctic Race Blue. Rounding off the changes are quilted Sensafin faux leather upholstery on the X5 and X6 and the standard fitment of Live Cockpit Professional (with twin 10.25-inch displays) on the Z4.

Last but not least, all models with BMW Operating System 8 receive a number of new features, including updated BMW Maps navigation that provides points of interest information even when route guidance is inactive. Plug-in hybrid drivers will also be able to distinguish between low- and zero-emissions zones, while full-electric models can save different charging profiles for frequently-used power sources.

The system also gets an M-specific user interface for M models and, on the iX and i4, shows the augmented reality view for the navigation in the instrument display. The Intelligent Personal Assistant, on the other hand, can make suggestions and explanations on several features, including adaptive cruise control, park assist and free trials of subscription features from the ConnectedDrive store.