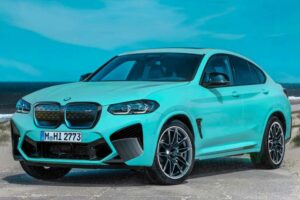 BMW currently has three electric SUVs on offer, two of which are built on existing internal combustion-engined vehicle platforms, while one, the iX, is a bespoke EV. The manufacturer is clearly looking to add more EV high riders, and a new application with the German Patent and Trade Mark Office (Deutsches Patent- und Markenamt) hints at where the manufacturer plans to go next.

Carbuzz discovered these trademark filings, dated October 2, from BMW asking for trademarks on iX6, iX7, iX8 and iX9, adding to the iX1 (pictured below), iX3 and iX4 that we already knew about. Out of all of these nameplates, BMW only currently sells the iX1 and iX3, with the iX4 believed to be the next model to debut.

All the new models are larger than the iX3 and iX4, and while we have some idea how big an iX7 or iX8 could be, iX9 is a mystery to us. BMW may have simply trademarked iX9 so that another manufacturer doesn’t take it and there are actually no plans to make a vehicle larger than today’s X7, but it’s still an intriguing prospect – what type of vehicle do you think iX9 could be used on? Tell us in the comments below.

And if you were wondering what an iX8 might look like, well, it contains an even number so it’s most likely going to be a coupe-like version of the iX7. The only one of these larger electric SUVs that we have heard about via rumors before is the iX6, which according to an older report from Bimmer Post, will debut in 2028, as a more rakish version of the a new iX5 that will enter production at the end of 2026.

The most recent addition to the range of BEV high riders is the iX1, which is the electric version of BMW’s smallest crossover, the front-wheel drive-biased X1, which shares its underpinnings with the current Mini.

It is currently far too early to speculate upon when each of the iX models will debut, or if BMW even has plans to make the bigger iX8 and iX9 models, but the manufacturer is clearly preparing for the future and a possible range of nine electric crossovers and SUVs. It is very likely that BMW may launch an iX4 based on the current-generation model, and even M versions of both it and the iX3, but aside from that we really don’t know much at the moment.