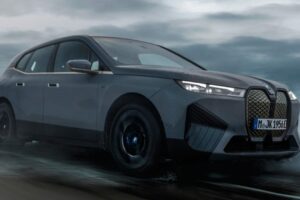 BMW has boosted performance of its iX electric SUV with this new iX M60 model. With 611bhp and a chassis tweaked by BMW’s M division, the iX M60 will take aim at the Tesla Model X when it launches in summer 2022.

Sitting above the iX xDrive50 as the most powerful variant of BMW’s technological flagship, the iX M60 develops a monstrous 1100Nm of torque thanks to a dual-motor four-wheel drive set-up, and will sprint from 0-62mph in 3.9 seconds. It powers on to a limited top speed of 155mph – 31mph faster than the xDrive50.

Given the extra power, range has dropped to a claimed 357 miles, compared with the xDrive50’s 380-mile official total. BMW hasn’t specified the size of the M60’s battery, but it’s likely to use the same 71kWh unit as fitted to other models in the iX range, sandwiched in the car’s floor. M-specific settings for the car’s air suspension system should sharpen up the iX M60’s handling, and as with lesser versions, it uses a blend of aluminium and carbon fibre in its structure to help offset the big EV’s weight and improved agility.

Alongside the mechanical upgrades, the iX M60 gains numerous design changes to distinguish it from other models. Blue M-branded brake callipers sit behind 22-inch alloy wheels, and there’s Titanium Bronze detailing on the kidney grilles and M badges.

BMW’s iDrive 8 infotainment system – which made its debut on the iX – remains, with a single curved panel mounted on the dashboard. This combines a 12.3-inch digital dash panel with a 14.9-inch central touchscreen, which can also be operated by a rotary controller on the centre console. The iDrive 8 set-up includes 5G connectivity, an augmented reality navigation system and the brand’s Digital Key Plus, which replaces the conventional key with your smartphone.

Now read our in-depth review of the BMW iX3…