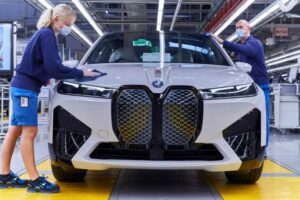 Looks like buyers would rather have the cheaper electric four-door coupe over the high-riding SUV.

Even though crossovers and SUVs (electric or otherwise) are going up in popularity around the world, to the detriment of traditional body styles such as the sedan or hatch, it looks like the new BMW i4 is proving more popular than the iX SUV.

According to i4Talk.com, the i4 had already racked up some 2,095 reservations in the United States earlier this week, while the iX had not even reached 1,000 orders (952, according to the source). They don’t provide any additional data, other than pointing out that in the Western United States, the ratio of orders is closer to 4 to 1 in favor of the i4.

Even though the BMW i4 is not an electric vehicle, but rather a repurposed gas-burning four-door coupe (it is the electric version of the new 4 Series Gran Coupe), a lot is still riding on its shoulders. It is BMW’s current answer to the Tesla Model 3 and it kicks off at $55,400 in the US, while in Europe its starting price is just under €60,000, although it does vary from country to country.

One factor that will boost the i4’s popularity has to be its lower price compared to the iX, which was designed specifically as an electric vehicle. The iX starts at $83,200 in America, but you can easily exceed $100,000, if you opt for the more powerful variant and add some options. In Europe, specifically in Germany, the iX kicks off at €77,300, but if you want the more powerful variant, that starts at just under €100,000 and once you start adding options, it quickly goes north.

Both vehicles are hugely important not only for BMW, but for the entire electric vehicle segment as a whole. We will be reviewing them both once they become available for press drives and we’ll also be doing our trademark 70 mph range test to see how they stack up, both against manufacturer claims, as well as their main rivals.