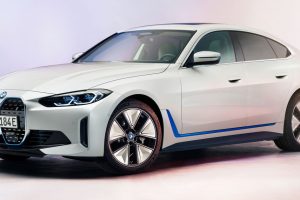 The second-generation BMW 4 Series lineup continues to be fleshed out, first with the vanilla G22 Coupé, then the G82 M4 and the G23 Convertible. Now, Munich has released the first photos of the closely-related i4, which is essentially a fully-electric version of the upcoming 4 Series Gran Coupé.

Sporting the highly-controversial full-height kidney grilles, the i4 has arguably the best-looking interpretation of that face yet, framing the nostrils with a trapezoidal centre opening and slim vertical Air Curtain inlets at the corners of the front bumper. The grilles, by the way, are largely closed off and feature a mix of raised and scalloped “dashes”, plus the i logo.

Along the side, the i4 features the usual Gran Coupé sweeping roofline and six-window glasshouse, retaining the G22’s reinterpreted C-pillar Hoffmeister kink. Unique to the i4 is the Air Breather vents, hockey stick side graphic (finished in BMW i blue here) and flush door handles, which are also expected to be found on the regular petrol- and diesel-powered Gran Coupé. Moving to the rear, you’ll find slim inverted L-shaped taillights, carried over from the two-door. The i4 distinguishes itself from other 4 Series models though its large rear diffuser and what appear to be fake vertical vents on either side of the bumper. Flat-faced 19-inch alloy wheels improve the car’s aerodynamic efficiency and round off a rather pleasing-looking exterior design.

The interior hasn’t been shown yet, but expect the i4 to share much of its cabin with the regular 4 Series, which itself is almost identical to the G20 3 Series. There are also little in the way of technical details, but it’s been confirmed that the car will be available in various different configuration and offer a range of up to 590 km on the WLTP cycle.

The i4 will also be available with up to 530 PS, likely on the also-confirmed M Performance model. That’s more than you get from even the range-topping M4 Competition; so equipped, the car will be able to get from zero to 100 km/h in around four seconds. More information will be revealed in the coming weeks.