Home » Car Reviews » BMW i3 Winter Test: Can It Do Doughnuts In The Snow?

BMW i3 Winter Test: Can It Do Doughnuts In The Snow? 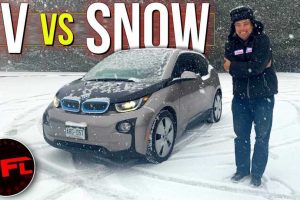 The Fast Lane finds out.

The Fast Lane Now finds the answer to that burning question: Can a BMW i3 do doughnuts in the snow? They take the newly-acquired 2014 BMW i3 out on a snowy day in Colorado to see how well it drives in the snow, as well as to have some fun.

Thankfully, the car came with Blizzak Blizzard snow tires which I used on my two BMW i3s. I found them excellent in the snow, and pretty good on icy surfaces as well. The only complaint I had was how quickly they would wear out, but that does happen with winter tires, as the rubber is softer for better cold-weather grip.

The one thing I did notice that isn’t correct in the video is the presenter says the i3 is “fully optioned”, and he’s mistaken. That is a base model i3, with the standard wheels and interior trim, and standard business navigation system, which has the tiny center display. In fact, it doesn’t appear as there are any options on it that are visible.

However, this isn’t the only video of a BMW i3 driving in the snow. InsideEVs own Andrei Nedelea tested out an i3s in a blizzard a few years ago for DriveMag and appeared to have quite a good time doing so. Unlike the regular i3, the i3s that Andrei was driving allows you to disable traction control for some additional fun.

While The Fast Lane Now wasn’t able to get their i3 to perform quite as Andrei did with his i3s, they did their best but the i3’s traction control would let them have too much fun. It did however do its job, and enable the is to drive well in the snow.

I found that the skinny tires on the i3 were excellent in the snow, piercing through even deep snow instead of packing it down and riding on top of it. In fact, it was probably the best quality of the i3’s unique tall and thin tires that BMW and Bridgestone designed specifically for the vehicle.