BMW Drops Touch Functionality In Some Cars Because Of Chip Shortage 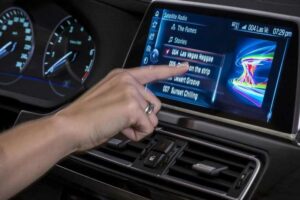 The global chip shortage has forced many automakers to stop offering some of the more high-tech features on their products and several companies even had to pause production at certain plants. BMW is getting hit hard, too, as the Bavarian company will have to drop touchscreen functionality on some of its models for the same reason.

The information was unearthed by Bimmerfest, where it was reported that “in an effort to maintain production levels through the end of the year, we have decided to remove the touch functionality from the Central Information Display in several vehicles starting production this week.” The announcement came about eight days ago, which means the move is already happening at BMW.

It’s important to note that this doesn’t mean the cars will be assembled without infotainment systems at all. The system will continue to work but it won’t be able to be controlled using the touchscreen function. All other physical buttons and the iDrive controller on the center console will remain fully functional. As a side note, BMW introduced touch functionality for its iDrive infotainment system for the first time with the iDrive 5 in 2016.

Below are the models that will temporarily be shipped without a touchscreen function:

If you see the 6UY option code on the window sticker of a BMW you are checking out at a showroom, bear in mind that it lacks touch functionality for the infotainment system. If you still decide to go for it, the automaker will give you a $500 option credit. Bimmerfest also reports dealers will be required to have customers sign a form confirming acknowledgment of the change.

Edmunds contacted BMW for confirmation of the information and the automaker added that “this measure is a result of the industry-wide supply chain issues which are affecting automotive manufacturing worldwide and causing limitations on the availability of some features or options.”