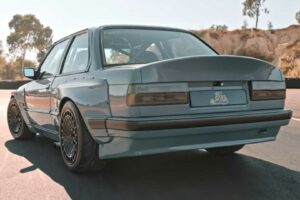 The BMW 3 Series E30 remains a true masterpiece of the entry-level premium segment. It has a timeless design, proven powertrains, and is actually a pretty solid platform for tuning projects. We’ve seen countless restored and/or modified E30s, but the example featured in the video above could very well be the weirdest of them all. Hold your breath, this one is really special.

The folks over at Cars.co.za have another pretty awesome build to share with us, and it proves once more that South Africa has a phenomenal tuning scene. This car started its life as a regular two-door E30 coupe “with the body splitting in place and rust creeping in.” Everything started with the decision of the owner to strip the entire car, repair the bodywork and chassis, and send it in for a full-body respray. In the process, the specialists at Ace Customs discovered the wiring was also a mess and decided to throw everything away.

The car arrived at their shop with a 1UZ Lexus V8 engine, though there were some issues with the electronics. The team fitted a Spitronics management system and finally managed to get the engine running properly. Once the powertrain was tuned, the tuners turned their attention towards the exterior of the car.

A full body kit was imported and fitted by Ace Customs, as well as a set of custom brakes imported from Japan and hiding upgraded aftermarket brakes. Inside the cabin, the original dashboard was removed and replaced by a custom-built aluminum dash with a bespoke center console. Last but not least, a full roll cage was fitted for extra rigidity, while a NOS was installed for some extra oomph from the engine.

The result? Well, it’s extraordinary. We won’t spoil all the details of this awesome build, so make sure to watch the video at the top of this page. It’s well worth your time and attention, trust us.