‘Blown away’: Guy Martin shocked at power of electric Porsche as he tests new EVs 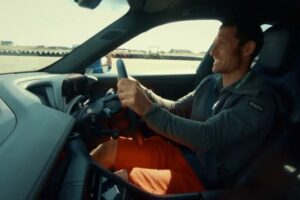 The former motorcycle rider turned mechanic sought out to make the fastest road-legal electric vehicle known to man on his new programme, Guy Martin: The World’s Fastest Electric Car? Along the way he tried out a number of electric vehicles, some prototypes and some on the market, as a way to acclimatise in preparation for his world record attempt.

Guy’s favourite vehicle appeared to be the power of the Porsche Taycan Turbo, which came in at a whopping £116,000.

Compared to its petrol equivalent, a Taycan should go at least twice as far for every pound spent on fuel.

The Morris JE may be the future of vans, with its slick carbon fibre interior and teal and white exterior.

Its 200-mile range makes it an excellent choice for a city delivery van, especially combined with its one tonne payload.

According to the show, industry experts have predicted that in five years, electric vehicles would have reached price parity with petrol and diesel equivalents.

Tips to help prevent your car from being stolen [WARNING]

He also tested the Equipmake E-Bus, a standard sized bus with the potential to do 100mph, without a limiter.

A recent study suggested that swapping a diesel bus for an electric one in a city like York, would save £5million in health costs in the first year alone, thanks to the lack of tailpipe emissions.

Guy initially had some problems with his next vehicle, a Swind EB-01, a £20,000 electric trail bike.

Before setting off, Guy read a tweet from X Factor judge Simon Cowell, which read: “Some good advice… If you buy an electric trail bike read the manual before you ride it for the first time.