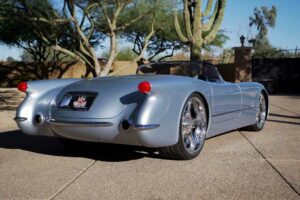 It’s every car designer’s dream to build their own car from the ground up. Dave Kindig, owner and designer at Kindig-it Design, has always loved the 1953 Corvette, but Chevrolet’s legendary sports car had some issues in its first year of production. The project started last season on Bitchin’ Rides, but just in time to celebrate hitting the 100th episode milestone, Dave Kindig achieved his dream of building his first ground-up design car—the Kindig CF1—a carbon-fiber-bodied, V-8-powered homage to the 1953 Corvette.

Related: Is your life not bitchin’ enough? Watch the 100th episode of Bitchin’ Rides on MotorTrend+, and catch up on every episode with the Kindig CF1! Sign up for a free trial today!

The 1953 Chevrolet Corvette was a game-changer in the American car market. In the 1950s, European cars were starting to eat up too much market share for domestic manufacturers’ liking and—believe it or not—American motorsport isn’t all about straight line acceleration or big banked ovals, and European cars were also dominating on American road courses. Chevrolet’s response was to develop a lightweight roadster that integrated European styling cues that could hold its own on the race track against its competitors from across the Atlantic, and the plan worked—sort of.

The 1953 Corvette was a styling success, unless you looked at it from the side, where the bulging front end became very apparent. When viewed side-on, most cars taper from back to front in size (front being smaller), but the first Corvette was opposite. It didn’t matter from what angle you looked at a 1953 Corvette, if you were over 5 foot, 5 inches(ish), you couldn’t drive it! The cabin of the first-year Corvette is notoriously small.

Those were the first two issues Dave Kindig decided to address with the CF1, sectioning 3 inches out of the front end of the car and creating a more proportionate flow down the side. He also stretched the cab of the original Corvette 4 inches—without altering the wheelbase, mind you—and dropped the floor pans under the seats to be level with the bottom of the chassis rails. Traditionally, Corvette floor pans are on top of the chassis rails, but the CF1 was always intended to be a turn-key production car and Dave wanted people of all heights to be able to fit in it.

Of course, this is Bitchin’ Rides, and Kindig-it Design is known for their stance and wheel packages. Again without altering the wheelbase or track width of a 1953 Corvette, Dave increased the wheel opening size and sketched out his concept with huge 22×12-inch rear wheels. Now it was time to actually make a car.

Building a one-off car is easy. OK, maybe not easy, but when custom car builders are creating a piece of automotive art they don’t have to take things like repeatability into consideration. The Kindig CF1 was intended to be a production car from the outset and that meant making jigs and molds of every custom part made by Kindig-it Design or an outside vendor, starting with the body.

Modern-day aftermarket support for most of your favorite American classics makes it possible to build a complete 1953 Corvette from all brand-new parts, and that’s exactly what Kindig-it Design did: bought every body panel needed to make a complete car, then set about sectioning and chopping the car to suit their styling and manufacturing needs. New wheel openings, stretched doors, a tapering section cut out of the nose, the dramatic increase in interior volume—everything done to improve the styling of the 1953 Corvette. But one thing had to go in the name of repeatability: The tiny tailfins on the taillight stalks.

Making jigs and templates for easily manufactured parts like brake lines and wiring harnesses is one thing, but (especially when dealing with composites) a reusable mold for a car body is an entirely different animal. Kindig-it Design has done plenty of composite work in the past, but the CF1 needs to be easily repeatable and consistent, so Dave enlisted the experts at Custom Reflection Coachworks (who also manufacture the production bodies) to help build durable and reusable molds for the CF1.

Everything on the CF1 is a Kindig-it Design original that pays homage to the first Corvette. The ’53 Corvette had wire cages over the headlamps, and Dave wanted to integrate that styling into the acrylic covers over the LED headlamps and daytime running lights. The taillights received the custom acrylic and LED treatment as well, with a surprise hiding under the very subtly hinged driver taillight—the fuel filler nozzle. The Dakota Digital gauges and instruments have also been crafted to match the faces and fonts of the 1953 Corvette, but use the latest and greatest HDX technology.

The chrome trim, windshield frame, grille, and bumper pieces are all cast aluminum. To make manufacturing these parts as repeatable and cost effective as possible, the Kindig-it crew used 3D scanners and printers to make test pieces that they could then use to make patterns for the foundry. Instead of State Brass Foundry & Machine having to hand-cut the sand casting molds for CF1 parts every time Kindig-it has to reorder, they have the pattern ready to go, ensuring shorter delivery times and consistent quality.

What Is a Kindig CF1?

Unlike a traditional Corvette, which has been a fiberglass body riding on top of some sort of metal chassis (was all steel, now as much as 40-percent aluminum), the Kindig CF1 is an entirely carbon-fiber body. There’s nothing more bitchin’ or cutting edge than carbon fiber (the full CF1 carbon-fiber body only weighs 70 pounds!) and the underpinnings of the CF1 had to match. That required a call to one of the best custom chassis manufacturers out there: Roadster Shop. The Roadster Shop Spec 7 chassis that all Kindig CF1s will ride on wasn’t spared the Kindig-it design touch, though.

The crew had to modify the chassis rails and cross members in the passenger area to allow space for the floor pan modifications Dave wanted to accommodate tall drivers and the body and wheel tub mounts were all massaged to fit the CF1. Otherwise, the Spec 7 chassis is as Roadster Shop built it: a C7 Corvette shrunk to fit a first-gen Corvette’s wheelbase and track width. The Kindig CF1 also ditches the C7’s transaxle in favor of a traditional IRS Dana 60-style differential.

In front of that differential is a four-speed automatic transmission (we haven’t confirmed, but it’s most likely some variant of the 4L80) and a Lingenfelter LS V-8 with gorgeous Borla eight-stack throttle body injection. The Lingenfelter mill is a naturally aspirated combination of LS3 and LS7 parts, good for a minimum of 650 hp. Fully fueled and ready to drive, the Kindig CF1 weighs less than 3,300-pounds!

As tribute to the 1953 Corvette, which was only available in Polo White with a Sportsman Red interior, the CF1 001 is painted in a Kindig original color, No Strings White, with a cherry red interior. Rick Cox—multi-time Kindig-it Design customer and commissioner of CF1 001—is perfectly happy with this choice, being born in 1953 himself and a lifelong gen-one Corvette enthusiast. But Dave unveiled two cars on the SEMA Monday Reveal stage just a couple weeks before the 100th episode of Bitchin’ Rides debuted.

CF1 002—built for Rick’s best friend, Dave Jones—has the honor of debuting a new original Kindig-it Design paint color. Dave Jones’ favorite color is blue, and when he told Kindig he wanted the second CF1, he said it had to be blue. Dave Kindig wanted to create a color that would look vintage but was at the same time unique and came up with Periysilver, a blending of the periwinkle paint dressing the engine compartment of CF1 002 and subtle silver flake.

As if realizing his dream of turning a unique design into a turn-key production car wasn’t enough, Dave decided to unveil the first two production Kindig CF1s to the world at the largest automotive trade show on Earth, the 2021 SEMA Show, to huge acclaim. The 100th episode of Bitchin’ Rides is just the end of the beginning of the Kindig CF1 (it is a production car and they’ve only made two so far). The birth of the CF1 started last season on Bitchin’ Rides and the only place to watch it is on MotorTrend+. Click here and get caught up on every episode with a free trial to MotorTrend+!