Home » Car Reviews » Best value EVs in the UK named as Mini, Nissan and MG come out on top

Best value EVs in the UK named as Mini, Nissan and MG come out on top 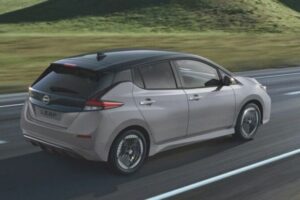 Drivers buying electric cars outright will save almost £4,000 over the cost of ownership according to the LV= ‘Electric Car Cost Index’ which has looked at the purchase price, tax, insurance, fuel and maintenance costs of 13 fully electric cars versus their petrol/diesel equivalents.

And the Nissan Leaf, MG5 Long Range Excite and the Mini Electric Level 1 are three of the best value electric cars for drivers considering the switch according to LV= General Insurance.

Those EVs work out cheaper whether bought outright, leased or via PCP.

All 13 cars are cheaper than the equivalent petrol or diesel model based on buying the car upfront and keeping it for seven years, while seven of the 13 are cheaper across a four-year lease term and four are cheaper on a three-year PCP agreement.

The savings on electric cars are heavily driven by lower average annual running costs – a massive £1,147.21 compared to £2,201.58 for a petrol or diesel car.

The research that led to the index also found that the cost to “fuel” an electric car for 8,000 miles a year is 61 percent cheaper, with petrol and diesel drivers paying £732 a year more on fuel to do the same distance.

Lower maintenance and insurance costs also drive down annual running costs for electric car owners, which are on average 47 percent cheaper than petrol and diesel cars.

However, the initial purchase price for electric cars is still some way higher than equivalent petrol or diesel cars.

DON’T MISS
Warm weather driving habits could land drivers with fines up to £5,000 [REVEAL]
Man calls towing truck on his neighbour for terrible parking [SHOCKING]
Motorists warned not to travel at certain times over Easter [WARNING]

But according to the research in some cases the gap is closing – the Vauxhall Corsa-e is only £2,175 more expensive than its petrol equivalent, and the difference between the Mini Electric Level1 and Mini Hatch Cooper S Classic is now less than £5,000.

Thanks to the lower running costs, drivers who outright buy any of the 13 EVs analysed by LV= outright will recoup some of their initial outlay over the average ownership period of seven years.

The data also showed that anyone interested in an EV is much better off leasing a car than taking out a PCP contract.

Apart from the VW ID3, every car looked at was significantly cheaper to lease over a four year period than via a PCP on a three year contract.

And when it comes to maintenance, the average annual cost for an EV, which includes a service and replacement tyres and brakes, is almost £200 cheaper (£304 vs £498).

That’s mainly because they have very few moving components, making them considerably less likely to break down as they age and much cheaper to maintain.

But the biggest annual saving comes from charging the vehicle rather than paying for petrol and if drivers have an electricity tariff with a reduced off-peak overnight rate, then the annual cost of charging an EV is reduced to just £180.59.

Insurance premiums are also cheaper on average cheaper for EVs with some cars including the VW ID.3 and Vauxhall Corsa-e substantially cheaper than their petrol engine equivalents, at 22 and 33 percent respectively.

The other significant saving for electric car drivers comes from not having to pay road tax on the vehicle.

Gill Nowell, Head of EV at LV= General Insurance told Express.co.uk exclusively: “It’s perhaps one of the best kept secrets of electric car ownership that the savings really stack when you look at all the costs.

“Our Electric Car Cost Index shows that while the price of an electric car is still more than a petrol or diesel, you can make substantial savings through the significantly lower running costs. Not only it is much cheaper to charge, especially if you do your charging off-peak at home overnight, but also to maintain, and in lots of cases, insure.”