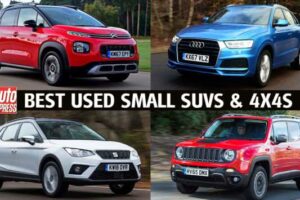 If you're after a little extra style without breaking the bank, then check out our guide to the best used small 4x4s and SUVs

Few areas of the new car market have exploded in popularity like the compact SUV sector in recent years. Whether you’d rather take a pragmatic or a slightly more superficial approach to car buying, it’s easy to see why the standards set and the choices available just keep on growing. Of all the segments on offer, few have to deliver such a wide range of strengths – and on such a tight budget.

In general, these mini-SUVs derive their underpinnings from superminis – and take up barely any more space on the road. However, the chunky 4×4-inspired looks and high rooflines which make them so appealing to buyers also make them usefully more practical – in most cases they’re genuinely roomy enough to handle family life.

So space and style are two of the biggest considerations here, but so are low running costs and reliability – although not necessarily at the expense of fun. Even in our used list, there are alternative-fuel powertrains available – be that hybrid, plug-in or even fully electric. Yet many of the cheaper combustion options offer enough power to promise a little enjoyment, too.

Above all else, these cars have to be affordable. The initial sting of depreciation has been felt by the first owner, so as you’ll see from the monthly PCP rates quoted by our sister site Buyacar, all 10 promise very competitive prices. Regardless of where your priorities lie, we’ve rounded up 10 of the finest used buys, rated on all of these strengths and more.

A mix of exploitable versatility and French design flair make the C3 Aircross one of our favourite new SUVs. Yet with prices starting from just £9,000, the Citroen makes even more sense as a used choice.

That sum will buy a pre-facelift car with plenty of space and useful features, such as a sliding rear bench. A supple ride and light controls make it relaxing and easy to drive, while the reliable petrol and diesel engines are eager. Factor in solid build quality, lots of kit and low running costs, and it’s easy to see why the Aircross bagged back-to-back Small SUV victories in our Used Car Awards.

A new C3 Aircross will set you back over £21,000, but a high-spec, pre-facelift version could cost you less than half that. A number of used examples can be found for just £9,999. This low cash price means that you have less to finance, resulting in low monthly payments on a four-year hire purchase contract – and less interest to pay.

The sharply styled SEAT can’t match the Citroen for space and versatility, but it’s a better car for keen drivers; quick steering and agile handling make it surprisingly engaging to drive, while the punchy engines deliver a fine turn of speed. Solid build quality, generous kit and good value are the icing on the cake.

We love the 1.0-litre petrol for its balance of performance, economy and refinement. Most SEAT Aronas on the market will have useful tech included in the cabin, such as Smartphone connectivity. Its boot is a useful shape, and while there could be more legroom in the back, it’s big enough for kids. Owners ranked the Arona as the best small SUV in our 2019 Driver Power satisfaction survey, so the ownership experience should be good.

The Jeep Renegade is a slightly more left-field choice for those that want a small SUV that’ll reach the parts others can’t: the four-wheel-drive versions are genuinely capable when the going gets rough. The Jeep feels a little at sea on the road and its interior is a little cramped and plasticky, but prices are low and it doesn’t cost much to run.

Buyers wanting a sensible and cost-effective used compact crossover are spoiled for choice, but one of the best is the original Kia Niro. Look past its rather bland styling and you’ll discover a spacious and well equipped family car that’s as easy to live with as it is to drive.

You’re spoiled for choice when it comes to engines, too, with self-charging and plug-in hybrid variants as well as the all-electric e-Niro model that delivers up to 280 miles on a charge. Then there’s the fact that all examples will still have cover from Kia’s seven-year warranty.

One of the first mainstream machines to combine a rugged SUV stance with sleek coupé looks, the C-HR is a great choice for families wanting to turn on the style. Under the Toyota’s eye-catching bodywork is the same platform as the Prius, which means similarly engaging driving dynamics, with impressive smoothness and refinement, plus the option of hybrid powertrains.

The well made interior is roomy enough, but that sloping roofline means rear-seat occupants may feel a little claustrophobic. On the plus side, a five-year warranty and an eighth place in Driver Power mean the Toyota should be a trouble-free choice.

If you’re looking for a more upmarket small SUV then the Audi Q3 is a standout choice. Depreciation has pushed prices to the point where it competes with cars that were a lot less expensive as brand-new buys.

You’re not just getting a premium badge with the Q3, either. The interior is very high-quality, looks great, and the in-car tech still stands up well compared with the latest new cars. It’s roomy inside, too – there’s enough space in the back seats for adults, even if the high central tunnel restricts legroom in the middle seat.

That tunnel is there because the Q3 was offered with quattro four-wheel drive, so buyers can benefit from improved traction in poor conditions. The engine range is small but you can’t go far wrong – the 2.0 TDI diesel is punchy and economical, while the 2.0 TFSI petrol is powerful and smooth. The 1.4 TFSI petrol is quiet and offers a good balance between the two.

Peugeot’s first attempt at a compact crossover isn’t the most glamorous option, but with prices now dipping below £4,000, it represents great value. Based on the original 208 supermini, it shares the same quirky i-Cockpit dash layout, but a stretched wheelbase means there’s much more room for rear-seat passengers, as well as a handy 360-litre boot.

It handles accurately, plus it was available with Peugeot’s Grip Control set-up, although you’ll need to check that any potential buy is still fitted with all-season tyres. All the engines are frugal, but the smaller petrols struggle when the car is fully loaded.

See the latest Peugeot 2008 prices on our sister site BuyaCar…

Over the years the Vitara has transformed from a fashionable fun-loving soft-roader into a sensible family crossover. That’s bad news for buyers who want to stand out from the crowd, but great if you’re in the market for a practical and cost-effective runaround. Despite its slightly dowdy looks, the Suzuki is great to drive, thanks to its quick steering and agile responses.

It’s also powered by some eager engines, including the punchy and frugal 1.6-litre diesel. And with its slick AllGrip four-wheel-drive option, the Vitara hasn’t forgotten its off-roading roots. The interior is a bit plain and some of the materials are low rent, but the Suzuki is roomy, robust and well equipped.

The Mazda CX-3 is the small SUV for those who love driving – it’s one of the most enjoyable cars of its type on the road.

You can choose from a couple of frugal diesels or a 2.0-litre petrol. The latter sounds oversized, but it maximises fuel economy in real-world conditions. With no turbo, it requires revs, but performance and economy are similar to the Mazda’s 1.0-litre turbo-powered rivals.

The CX-3 has an upmarket interior with excellent seats, but practicality is its weak spot – the rear seats are a little cramped, and the 350-litre boot can’t quite match the capacity of rivals.

It was an affordable car when new, so a used Captur that’s already shed much of its original price is an even better buy. This first generation was a big seller in the small SUV class when it made its debut, and as a used buy it represents great value for money.

A big part of the reason for this is the practical interior, particularly the big boot. It even has a sliding rear bench, so you can increase rear legroom or boot space as you need it. While the latest Captur is praised for its interior quality, the old model feels a little more basic, but it’s still well equipped and the high seat position will win many fans.

Thanks to numb controls, the driving experience isn’t the greatest when compared with some rivals. The engine range is a little underpowered, too, but it is economical. If you need more power, then the 1.3-litre turbo petrol introduced towards the end of the production run offers strong performance.