Best Spy Shots For The Week Of May 30 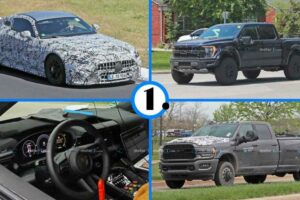 The Audi A6 E-Tron is a future electric sedan riding on the PPE platform. It has split headlights in front and smooth styling for the nose. At the back, this one still has placeholder taillights.

This refreshed BMW X6 is allegedly the M60i version that would replace the M50i. It would use the S68 4.4-liter V8 twin-turbo engine from the X7 M60i. Inside, the model adopts the new iDrive 8 infotainment system.

This spy video of the Ford F-150 Raptor R lets us hear the V8-powered muscle truck. In addition to the new engine, this version appears to have an upgraded rear suspension and larger diameter exhaust pipes. The visual changes appear quite minor, though.

The second-gen Hyundai Kona receives a fresh look with headlights in trapezoidal surrounds in the lower corners. Runnings lights appear to be visible between the tip of the hood and front bumper. At the back, there are separate taillights. One set is on the tailgate, and the other pair is on the lower bumper.

The Mercedes-AMG GT Coupe will be the coupe sibling to the SL Roadster. This model will have a more aggressive look and sportier driving dynamics. A variety of engines should be available, ranging from the hybrid-assisted 2.0-liter turbocharged four-cylinder to versions of the 4.0-liter twin-turbo V8.

This gallery of photos included a fantastic look inside the new Porsche Macan EV. We can see the digital instrument panel, multifunction steering wheel, and a portion of the controls on the center console. On the outside, the development vehicles wear two different front fascia designs.

Gallery: Porsche Macan EV Spy Photos Inside And Out

This Ram 3500 boasts a tweaked hood hiding an air intake, and it gets the Magna Clearview camera monitoring system that includes a frameless rearview mirror with a customizable display from three cameras.

The Skoda Scala refresh receives a new front and rear fascia but with the same headlights as the current model. The changes are fairly minor.

Volkswagen continues to test the Aero B electric sedan with a fake grille on the front and faux exhaust outlets on the back. It rides on the MEB platform like the ID.3, ID.4, and ID. Buzz. In essence, this model would be the EV equivalent to the Passat in the VW lineup.