Home » Car Reviews » Best Renderings For The Week Of October 31

Best Renderings For The Week Of October 31 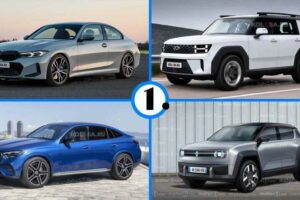 The next-generation Santa Fe is already on the road testing in the form of camouflaged prototypes. The disguise is heavy, though it seems that it hides significant design changes compared to the outgoing model.

This is a more subtle and conservative alternative to the 4 Series Coupe the Bavarian company currently sells. To us, it brings memories of the older 3 Series two-door models, including classics such as the E30 and E36 generations.

With the new GLC now officially on sale almost everywhere around the world, it’s not that difficult to predict how its coupe-SUV sibling will look like. This updated rendering of the GLC Coupe puts production clothes based on several prototypes we’ve spied already.

Expected to arrive on the European EV market around the middle of the decade, the revived Renault 4 will replace the aging Zoe electric hatch. Our artists tried to envision what the production version of that car could look like based on the Renault 4ever Trophy Concept unveiled in Paris this year.