Home » Car Reviews » Best Renderings For The Week Of August 22

Best Renderings For The Week Of August 22 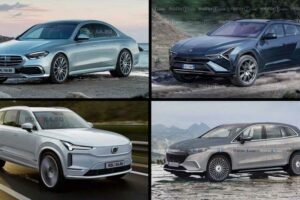 The Maybach EQS SUV concept will soon morph into a production vehicle and become the German company’s most luxurious electric high-riding model. Our exclusive rendering previews a design that isn’t significantly different from the concept and this is probably good news knowing how posh that vehicle was.

The current generation XC90 looks fresh even today but it is now roughly eight years old. Soon, it will be retired and replaced by a brand new generation that will introduce a fresh new design. This rendering proposes pop-out door handles and a new take on Volvo’s traditional upright taillights.

Okay, let’s admit it – this is purely our imagination. However, Lamborghini CEO Stephan Winkelmann recently announced the first EV of the brand will be released in 2028 with a 2+2 seating configuration. Is it going to look anything like this rendering?

The new E-Class is one of the most popular upcoming models that we’ve spied multiple times. It was finally time for the spy shots to morph into a previewing rendering and this virtual drawing of the sedan from Kolesa.ru comes as an accurate glimpse at the future of the nameplate.