The plug-in hybrid market has grown exponentially in recent years. Here are our top 10 electrified favourites. 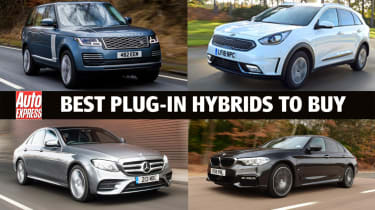 If you're in the market for a plug-in hybrid electric vehicle (PHEV), you're spoiled for choice these days. An increasing number of car makers are wheeling out plug-in hybrid cars with firms such as BMW, Volvo, Porsche, Honda and Mercedes all expanding their electrified line-ups to compete alongside hybrid pioneers such as Toyota and Mitsubishi.

So which plug-in hybrids do we recommend? With so many now on offer, we can bring you a top 10 of the best options, just follow the links to see our favourites.

Should you buy a plug-in hybrid?

Plug-in hybrids are proving popular for a number of reasons. As technology improves and more car makers join the fray, the price you pay for a plug-in vehicle is gradually coming down. Then there are the tax implications, with many plug-ins offering far lower VED road tax and benefit-in-kind rates for company car users thanks to their low emissions.

A close second to the low running costs is the fact that this hybrid kit doesn't require you to compromise on the way you use your car. The key is to remember to plug the car into a charging point wherever possible to maximise the amount of electric running you do but if you can’t charge the car just reverts to its internal combustion engine. If you think of your car like a smartphone, and get into the habit of plugging it in overnight to charge, then you'll soon see the lower costs that electric driving can bring.

Of course, a big downside of a plug-in hybrid is that if you don't charge it regularly, then you won't be seeing any benefit in lower running costs. Most plug-ins use a small petrol-engine combined with the electric motor and battery pack, so when the battery is flat, it's doing all the work. And with the added weight of the battery, and usually a smaller fuel tank designed to make space for the hybrid system, you can expect a smaller range and lower mpg than an equivalent petrol or diesel car.

How has the plug-in hybrid market evolved?

The first commercially available plug-in hybrid was the Toyota Prius Plug-in. It was very much an extension of the electric drive offered by the standard 'closed hybrid' Prius, and offered a theoretical range of around 12 miles on battery power alone. That was significantly more than the standard Prius, but not an outstanding figure. It was a few thousand pounds more expensive than the standard car, too.

Since then, we've had plug-in hybrids as diverse as the futuristic BMW i3 supermini, to conventional family models like the Volvo V60 Plug-in, sporty hatchbacks such as the Volkswagen Golf GTE and even supercars like the Porsche 918 Spyder.

Today, there are a number of SUVs and family cars with plug-in ability, and some even keep their 7 seat interior layouts. So there should be a plug-in hybrid to suit all needs while also delivering low running costs – as long as you charge them up, of course.

Have you ever owned any of these plug-in hybrid cars? Let us know your view on them in the comments section…

Get the latest electric car news, reviews and analysis on DrivingElectric.com