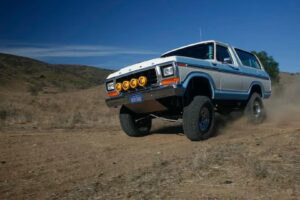 I was just wondering if I could ask a few questions and get some advice from you. I’m not very techy or much of a fabricator like most of the guys out there in the 4×4 world are, but I got my grandfather’s old truck that I’m building into an overland-style truck. It’s a 1993 F-150. All of the shocks were bad and all the springs had rusted out and broken, so I put in all new parts that were included in a 4-inch lift. I put on 33-inch tires. I need to know the correct gears to put in to get some of the power back without completely killing fuel mileage (fuel mileage already isn’t great, ha!) It has the 5.0 V-8 and I’m almost positive the tag on the rear axle says “3.88 / 8.8.” I found a formula to go by—new tire size × old gears ÷ old tire size—which gets me 4.56, but I’m not sure if it is correct. Sorry for the long-winded email. Any help would be appreciated. Also, any good ideas on better suspension setups would cool.

Figuring out gear ratios is an art as much as it is a science. This time in Techline, my friend and unquestionable off-road expert Christian Hazel has provided the answer, and I couldn’t agree more. On top of Chirstian’s years of experience, he has also recently regeared a Ford Bronco for his new show 4×4 Garage, so I’ll pass the staff to Christian for his sage advice. He writes:

“For starters, believe it or not, your biggest mileage hit is going to come from the suspension lift. You’ve increased the amount of turbulent air under the vehicle, which will act almost like a small parachute. That’s one of the big reasons you see plastic or rubber air dams or valances under modern trucks—to push the air around the vehicle rather than underneath it.

That said, 33s aren’t all that big of a tire, so as long as you don’t get the bigger-is-better bug later on and wind up going to 35s or 37s, a 4.10 gear is roughly what I’d recommend for what you’re looking to do. I think, however, that if you go from 3.55 to 4.10 with the V-8, you won’t recoup your regearing investment in fuel economy.

There’s not a whole mountain of difference between the 3.73s and 4.10s. The actual formula you use to determine rpm would be 336 x speed x overall gear ratio / tire diameter. The tire diameter measurement should be taken from the static loaded radius—in other words, the distance between the center of the rear hub to the ground with the weight on the vehicle, multiplied by two. In your case, the tires most likely measure out at 31.75 inches and your transmission overdrive ratio is 0.67, which is pretty deep and helps with freeway speeds. It essentially turns 4.10s into 2.75s, or 3.73s into 2.50s.

Personally, I’d do 4.56s, because the extra gearing will help you a lot with getting that big truck up and moving around town, and going down the trail. With an engine speed of 2,425 rpm, the extra freeway rpm won’t really ding you all that much at the pump. The 3.73s probably would still feel a bit undergeared but the 4.10s would be a good compromise between the two.”

In episode 1 of the new video series 4×4 Garage, host Christian Hazel tears down the suspension of a 1988 Ford Bronco for a 6-inch Superlift system and dives into the axles to prep them for new 4.88 gears and Eaton TrueTrac differentials to support the 37×12.50R17 Falken A/T3W all-terrain tires for awesome performance. Want to see more? Subscribe to the MotorTrend YouTube channel!