Home » Best Dash Cams: reviews and all you need to know 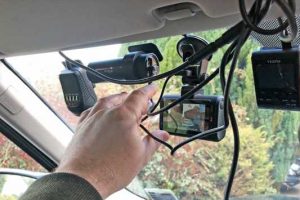 Capture every journey with a high-definition video recorder. We pick the best kit for your windscreen

Whether you’re looking to protect your no-claims bonus, help catch criminals, or maybe even find fame on YouTube, dash cams are more popular than ever. These all-seeing cameras have settled thousands of insurance arguments, helped prevent crime, and provided hours of online viewing pleasure.

Technology is moving along at a pace and prices are falling too, with even basic cameras offering functions such as GPS to record your location and speed. The most sophisticated cams now offer super-high-quality 4K recording to make crucial details such as number plates easier to read, while other hi-tech features include voice activation, which makes them simpler to use.

Are these features gimmicks or worthwhile? We tried eight of the best cams to see which should capture the action from your screen.

To ensure the test was fair, we mounted all of the cameras on our windscreen so that they were capturing footage in exactly the same situations. We then drove in the most challenging conditions for cameras, including bright sunlight and darkness, and we also tested how they coped with tunnels, which are a challenge for processors. The footage was then downloaded using the manufacturer’s own app or desktop program, if possible, to see how easy it was to find and edit the footage. Points were also awarded for useful features and value for money.

Nextbase continues to set the benchmark for dash cams in our tests. Just when rivals seem to be getting close, the company moves the bar even higher with clever features and new technology.

The 4K 622GW offers the clearest footage of any camera in this assessment, a competitive price and a host of useful features. If you don’t need the 4K quality, then the 522GW offers a decent saving and has most of the same features. The closest rival to Nextbase in terms of image quality and ease of use is Kenwood’s DRV A601W, so it takes the third podium spot.

Nextbase rushed us the first prototype of its new 4K 622GW, because it was confident that it would be better than anything on offer from any rival. And it was right.

Once the polarising filter is set by twisting the lens, the picture quality is exceptional in all conditions, with great detail and clearly defined colours. It responds quickly to rapid changes in light conditions, and number plates are easily legible.

But it isn’t just image quality that makes this camera special. It also has Bluetooth and WiFi, while What3Words location data and Alexa voice activation are also included – although these two systems weren’t ready to try on our test unit. But even without these the 622GW emerges as a winner, especially at this price.

If you’re not convinced you need 4K image quality, then the Nextbase 522GW offers most of the features of a more expensive camera, but at a more affordable price. Like the 622, the 522GW has a magnetic mount, plus easy-to-use applications for downloading and editing footage and tagging information, including GPS location data, speed and timings.

This cheaper model also has Amazon Alexa compatibility, which means you can use voice recognition to access some features, including asking it to protect footage after an incident. This is far safer than trying to search for a specific button while on the move.

With a 140-degree lens, the footage is usefully wide, too, and even though it ‘only’ records at 1080p resolution, the quality is pretty good in all light conditions.

It might not be quite as compact as the Pioneer, but the Mola is still small. The slim mount means it might be more discreet than the others once installed. The price is tiny, too, and it’s amazing value for a camera with 1600P resolution, even if an SD card costs extra.

It’s pretty easy to set up and has a smartphone app and WiFi connection, too. The footage is decent enough, but it does suffer from blur on rougher roads. The app isn’t the easiest to use and suffers from some poor translations, and you’ll want to quickly turn off the voice welcome. Its message of “Hello Ding Ding Pai” is amusing at first, but soon becomes irritating. Even so, at this price the N3 is a winner.

Kenwood’s new A601W unit has some features that we really like from a dash cam. Chief among these is a magnetic mount, which makes it much easier to remove the camera to keep it safe or swap between cars. Kenwood’s online and smartphone viewing apps are also among the easiest and most intuitive to use.

In terms of footage, the Kenwood’s daytime video is exceptional when it’s on smoother roads, as you’d expect from a 4K camera, and it copes well with rapidly changing light conditions. But it doesn’t have the widest field of vision, at 130 degrees, and the quality of the footage isn’t nearly as impressive when the road surface is a bit rougher, especially in dark conditions.

The A601 is good value for a 4K device, but it’s slightly short on features when compared with the Nextbase front-runners.

MOST cams have a smartphone app, but the Nexar goes to the next level. The cam connects to a phone as soon as you start driving, and it records information on cloud-based storage, so you can view footage very easily even if you are away from the car. The footage quality is fair, but the constant alerts and reminders soon become irritating.

It attaches to your screen with a suction pad rather than adhesive, and comes with a generous amount of cable to make it easy to hide on the way to a 12V socket. The camera itself isn’t so discreet, though, because it’s chunky compared with the others here, especially with the fist-sized mount.

There’s a big screen with an easy-to-use menu and the 150-degree camera viewing angle gives a wide field of vision, so you get a greater view of the road. As you’d expect, the footage quality isn’t the best, especially at night, but as a no-nonsense camera, we were impressed by it.

Unusually, the Amacam uses a SIM card, so it can send camera footage and GPS data even when it’s not linked to your smartphone. That means you could log into the app and view what the camera is seeing both inside and outside the car from anywhere in world, and it also doubles as a tracker.

It’s unusual in other ways, because it doesn’t have a built-in screen and can only be hard-wired into the car, rather than plugged into a 12V socket. We’d have liked a longer cable, though; it only just reached our car’s fuse box.

The app itself is a little clunky and badly translated, but it works well enough, although the footage the camera captures is nothing special. This device is more suited to fleet owners who want to keep an eye on their drivers.

The flagship BlackVue product is eye-wateringly expensive, but the price does include a rear-view camera. As you might expect, this is a beautifully made and well specced cam, with a stylish design that means it wouldn’t look out of place on the windscreen of an exotic supercar.

If you want to keep that supercar protected, the BlackVue will also connect to a car’s WiFi hotspot and allow you to view the location and live footage from anywhere. The downside of the BlackVue’s sleek, cylindrical design is that there’s no built-in screen; instead the camera relies on a series of lights and an irritating synthesised voice to tell you its status.

The camera dealt with changing light conditions well, but overall we were a little disappointed with the quality of the footage, especially since BlackVue’s last model had done well on test before.

Pioneer is new to dash cams and its first, the VREC-DH200, is tiny. The mount is quite big though, so the unit dangles down by 9cm – possibly a problem on a shallow screen. There’s an app to view footage and change settings, but the quality isn’t great, and the files need converting to view on some computers. That, and the price, hurt its score.

Thinkware’s flagship camera is another that does without a screen to view footage or access menus. Instead it relies on a polite-sounding voice synthesiser and a set of lights to reveal its status.

It comes with a hard-wire kit, which makes it tricky to swap between cars, but does allow you to make use of the U1000’s parking monitor – if your car is knocked, the cam should record it.

The list of extras is impressive, and includes a speed-camera locator and lane-departure warning. There’s 4K recording and a Sony chip to ensure image stability, but we aren’t bowled over by the quality of the cam’s footage. The U1000 can’t match the overall excellence of our cheaper test winner.

The A129 Pro is the cheapest 4K camera in this test, and it has excellent image quality, helped by Sony sensor technology, which keeps the image stable on rough roads. The lens captures a relatively shallow 130-degree view, but the quality is decent enough. It’s quite a compact unit, too, making it easy to hide behind a rear-view mirror.

Its size does have drawbacks though, because the menu buttons are tiny and tricky to understand, especially since the camera doesn’t come with any instructions. We found it difficult to set up as a result, and it kept defaulting to a time-lapse setting. Once you’re connected to the camera via WiFi or have downloaded footage it doesn’t become much easier, because the software is clunky compared to rivals here.

Going on a road trip? Then read our guide on choosing the best Roof Tents here..