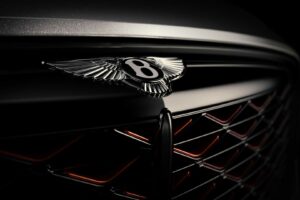 The Bentley Mulliner Batur will be a hand-built grand tourer that will introduce the British brand’s new design language. It’ll make a full debut during Monterey Car Week on August 20 at 8:00 PM PST.

According to Bentley, the Batur’s design will point toward the look of the brand’s upcoming electric vehicles. The company is positioning the grand tourer as the successor to the limited-run Bacalar.

The teaser images include a closeup of the Batur’s grille. Bentley’s flying B badge is high on the front end. There’s a chrome grille with a V-shaped mesh pattern. The vehicle’s name comes from Lake Batur in Bali, Indonesia.

The Bacalar (below), the Batur’s predecessor, was a two-seat, luxury convertible. Bentley limited production to just 12 cars. The Mulliner personalization division took around six months to build each one. Power came from a twin-turbo 6.0-liter W12 making 650 horsepower (485 kilowatts) and 667 pound-feet (900 Newton-meters) of torque.

While Bentley’s teaser hints that the Batur might have an electric powertrain, look for it to have a very limited production run like the Bacalar. The brand’s first mass-produced EV is still several years away due to a recent delay. The current plan is to launch the vehicle in 2026, rather than the original strategy of introducing the product in 2025.

Earlier statements from Bentley CEO Adrian Hallmark suggested the company’s EV could have as much as 1,400 horsepower (1,044 kilowatts). He indicated owners would be able to dial back the acceleration to hit 60 mph in around 2.7 seconds, if hitting that speed was uncomfortable for the brand’s customers. The vehicle reportedly fits into the electric SUV segment.

The delay for the Bentley EV is allegedly not related to Volkswagen Group’s software division being behind schedule on the Project Artemis for creating a future family of Audi, Porsche, and Bentley electric vehicles.

The situation with the software was allegedly so bad that it was a cause for VW Group to remove Herbert Diess as the company’s chairman of the board of management. The automaker replaced him with Porsche boss Oliver Blume.