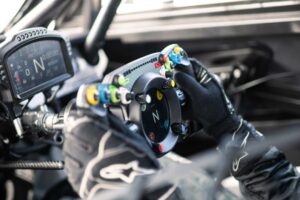 The wheel was designed for the Bentley Continental Pikes Peak GT3 racer, but also works with Fanatec sim racing hardware

Bentley has teamed up with gaming hardware developer Fanatec to launch a new steering wheel that works not only in racing cars, but also on racing simulators and gaming rigs.

The wheel has been designed for the new 750bhp Bentley Continental Pikes Peak GT3 racer, which will tackle the famous hill climb course later this month running on e-fuel.

However, the wheel is also compatible with Fanatec’s force-feedback gaming wheel bases.  It’s made from a lightweight blend of carbon fibre and magnesium alloy. There’s also a digital display in the wheel’s centre, which displays the car’s current gear, telemetry data and lap times in both the physical and digital worlds.

There’s also such as paddle shifters for the gears, rotary dials, momentary buttons and directional control sticks. All of the switchgear can be programmed to control functions on both a real racing car and a sim racing setup.

Bentley also supplies a hard carry case and a display mount for the wheel, the latter of which allows it to be mounted on either a wall or a desk. When it’s mounted (and connected to a USB power source) the screen will even display a Bentley-branded clock.

Paul Williams, Bentley’s motorsport director, said: “Our detailed collaboration with Fanatec has repurposed the steering wheel from the Bentley Continental GT3 Pikes Peak car for virtual use. There cannot be a more realistic way for gaming enthusiasts to experience the thrill of driving one of our fastest ever vehicles, from home.”