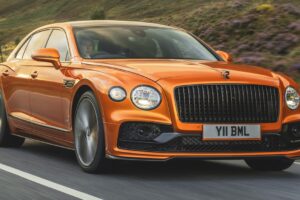 Bentley has unveiled “one of the last models to feature the iconic W12 engine”. It’s called the Flying Spur Speed, and it acts as a direct replacement for the standard W12-powered Flying Spur, which went out of production in May 2022.

Unlike its Continental GT Speed cousin, however, this Speed is no more powerful. Under the bonnet is the same 6.0-litre W12, producing 626bhp and 900Nm of torque as in the standard car. This means the performance figures are unchanged, with a 0-62mph time of 3.8 seconds and a top speed of 207mph.

Once again, the 12-cylinder engine powers the rear wheels alone most of the time, with the front wheels driven only when required by traction levels. The chassis also mirrors the setup of the Speed’s predecessor, with the standard fitting of three-chamber air suspension and a 48-volt-powered active anti-roll system.

An all-wheel steering system meanwhile turns the rear wheels in the opposite direction to the fronts at lower speeds for better manoeuvrability, and in tandem with them at higher speeds for improved agility. Finally on the chassis front are the biggest iron brake discs fitted to any road car (matched by the Continental GT) at 420mm in diameter for the front pair.

While the driving experience will be shared by the outgoing W12 Flying Spur, the Speed at least does plenty to differentiate itself from the older car aesthetically. There’s a darker tint for the front upper and lower grilles, plus the front and rear lights. The Speed rolls on a new and unique set of 22-inch alloy wheels available in various finishes including gloss black and silver, with an alternate design offered as an option in the same size.

Inside, it’s possible to clad all of the touchpoints in Dinamica Pure, which is made from 73 per cent recycled polyester. There’s a greater level of interior choice available, with 15 leather colours offered, up from five. Veneer options include Piano Black, Crown Cut Walnut and Dark Fiddleback Eucalyptus.

The digital instrument cluster now includes new graphics, which Bentley says are inspired by “luxury chronographs”. All occupants will be able to enjoy heated, ventilated and massaging seats, and plenty of electrical adjustment – 24-way in the front, and 14-way in the back.

Pricing hasn’t yet been revealed, but we’d anticipate a slight rise compared to the figure charged for the discontinued W12.

Now read our review of the Bentley Flying Spur…