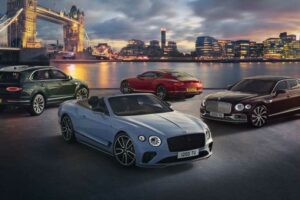 Bentley is over a century old, but its presence in China is much younger. The luxury automaker is celebrating 20 years in the Asian country, and it’s doing so by launching four limited-edition Mulliner models. Bentley will produce 80 in total – 20 of each, with Mulliner creating unique specifications for each model that are based on famous London locations.

The four cars are the Continental GT, the Continental GTC, the Bentayga, and the Flying Spur. Each car’s special configuration – The Guard, The Carnaby, The Savile Row, and The Pall Mall – feature unique designs, embroidery, and other Mulliner features. Mulliner will handcraft each car.

The Bentayga, called The Savile Row, combines Cumbrian Green with 22-inch, 10-spoke wheels finished in the same color. Inside, the four-seat SUV receives Mulliner’s “Serenity” seat quilting on the seats and doors with a suit and bow tie embroidered into the headrest to present the great tailors of Savile Row.

The final Mulliner build freshens up the Bentley Flying Spur into the Pall Mall. This build pays homage to the Queen’s State Limousine, which Bentley delivered to her in 2002, the same year Bentley began sales in China. The Flying Spur features a two-tone Beluga over Claret paint scheme with matching 22-inch wheels. Inside, the Pall Mall features a unique front-to-rear color split.

The first examples of these unique Bentley’s will begin arriving in China shortly, with the remaining cars being exclusively sold in the country over the coming months.