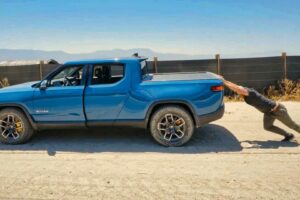 Rivian quotes the EPA range rating for its R1T with the larger 135 kWh battery pack (with 125 kWh usable capacity) as being able to deliver 314 miles on one charge. However, independent tests have shown that you can even exceed the official claim, but how long can you keep on driving an R1T on its last electrons?

Well, fresh R1T Launch Edition owner Ben Sullins decided to make a video in his new truck to see how far it goes on one full charge. To give it a little twist, he also wanted to see how the vehicle behaves when it’s close to running out, as well as what happens at this time and how long after it indicates zero percent state of charge will it grind to a halt.

So if you yourself had these questions, check out his video whose title mentions about the R1T that “when it dies, it dies.” Interestingly, even though Edmunds actually exceeded the EPA claim a few months back, driving the R1T for 317 miles, they were actively trying to drive efficiently in order to see how close they could come to the official number.

When Out of Spec Reviews put the R1T through its 70 mph highway range test, a far more controlled and reliable test, and it achieved 289.3 miles. It probably had a few more miles to give, though, as it was not actually driven until dead in that particular test.

In our own 70 mph range test (performed in cold weather, not ideal for maxing out EV range), Tom managed to drive the vehicle for 256 miles, although the vehicle was on the least efficient wheel/tire combination, the 20-inch rims shod in all-terrain rubber (which Rivian says can drop the range by as much as 40 miles).

Ben, however, just drove it around like you would normally and even though the vehicle (whose state of charge was 100 percent at the start of the video) showed a theoretical range of 293 miles, it actually drove noticeably less than the prediction before refusing to move any further. He managed to get his R1T to drive 236 miles before it needed to be towed away to get charged (which he initially wanted to do with another Rivian R1T).