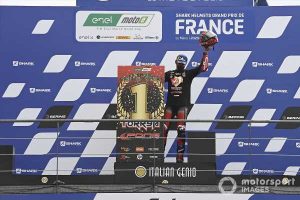 The 2020 MotoE World Cup has gone the way of series rookie Jordi Torres, who was crowned the champion in a dramatic double-header finale at Le Mans.

The Moto2 and World Superbike race winner joined the Pons squad for his debut campaign in the all-electric bike series, which entered its second season in 2020 having made its debut last year on the MotoGP support bill.

Torres wasn’t billed a favourite for the title despite his vast two-wheeled experience, but a podium in just his second race during the Andalusian Grand Prix weekend quickly changed expectations. Two podiums at the Emilia Romagna round put him firmly in the hunt, before the title became his to lose in the first race of the Le Mans finale.

A crash for reigning World Cup winner and points leader Matteo Ferrari on the opening lap of the restarted first race, as well as Mattia Cassadei in the first start, gave Torres a prime opportunity to take command.

And that’s exactly what he did, guiding his Pons machine to his first win in the series to lead the standings by 18 points for the final round.

A tentative start to the second race almost cost him dear as Eric Granado on the Avintia bike touched Torres’ rear wheel at the Dunlop chicane on the first lap. Somehow, Torres escaped and put in a tidy race to come home sixth and secure the 2020 MotoE World Cup.

Fifth for Ferrari moved him into second ahead of Aegerter in the points, who was powerless to overturn his misfortunes in fourth.

The final race of the season was one by the same rider who took the very first MotoE win last year at the Sachsenring, and who has struggled for form largely across 2020, Niki Tuuli.

In the final instalment of Behind the Race from ThEVox Network, Lewis Duncan is joined by Michela Cerruti to discuss the dramatic title showdown at Le Mans for the 2020 MotoE World Cup.