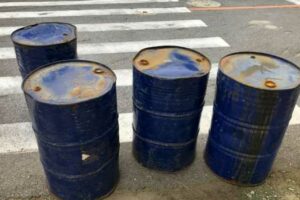 The use of rebated, or ‘red’ diesel in the UK was restricted by the Government on April 1 this year, and according to experts in the construction industry has already led to incidents of fuel theft increasing dramatically.

But there are wider fears that the additional costs incurred by construction firms could result in even higher house prices around the country.

While the Government allowed exemptions to the ban for some sectors including agriculture and forestry, that doesn’t apply to construction companies.

The Government has argued that the move is in line with its goal to achieve carbon neutral status by 2050 but a trade body in Scotland disagrees, warning the banning of red diesel is of “zero” environmental benefit.

And it said that the restrictions could further worsen the current cost of living crisis.

“Housebuilding is what keeps a lot of the country going. The bottom line is house prices are going to go up to the point where they are not affordable.”

The building sector has now been forced to use white or ordinary diesel, which has shot up in price, spurred largely by instability due to the rapidly-escalating war in Ukraine.

Mr Mackintosh added: “In an ideal world, the government will note what [it has] put in place is not delivering an environmental benefit.

“The only way to do that is to offer a rebate on sustainable green fuels.

“Our industry fully supports decarbonisation and the net-zero goal, but not when we are under so much cost pressure. We can’t afford to pay more.

“It is (of) zero environmental benefit, it is a tax grab.

“What we can’t calculate is the loss of business over the next 12 months.”

James Penman, who runs a firm in Fife and has suffered break-ins where individuals took syphoned fuel from a lorry, thinks the recent change in UK Government policy could be partly to blame and estimates the change is already costing around £1,000 extra per vehicle.

He said: “It’s an open can of worms in terms of the thefts on our building sites and bases.

“If they can’t get into the tank, they will just bore a hole in the side of the tank, so we’re actually looking at doing away with all the locks on top of the machines.”

“Our reforms will mean that many organisations instead now need to use diesel taxed at the same rate as that used by ordinary motorists, helping us to move to net-zero by 2050.”