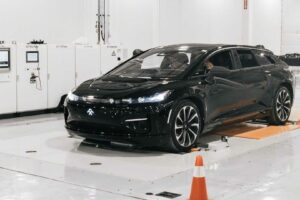 Faraday Future appears to be alive and kicking again. The EV startup originally wanted to launch its first model, the FF91 SUV, back in 2018. However, the startup faced a wide array of financial setbacks and staff turnover issues. Founder Jia Yueting filed for bankruptcy in 2019 and stepped down as CEO, instead taking up a more reserved role as Chief Product and User Officer.

In July 2021 the company was listed on the Nasdaq and plans were announced for additional FF81 and FF71 models. Still, many were doubtful about FF91 production and little progress was seemingly made in the months following Faraday Future’s listing. Clearly, the startup was still struggling financially and needed to raise more capital.

Faraday Future reported an operating loss of $137 million in Q2 of this year and suggested that it would need to raise $325 million in order to continue running. Furthermore, the company’s largest shareholder, FF Top Holding, sued the startup stating that it’s “suffering from a crisis of leadership at the board level”. Hence FF Top Holding called for several board members to be removed, including director Brian Krolicki.

Earlier this week it was revealed that Faraday Future had settled its dispute with FF Top Holding and several executives had been replaced with new members coming in. An additional $40 million in near-term funding from convertible notes has subsequently been raised, as well as a further $60 million from Senyun International.

Whether or not this latest round of funding will be enough to see the FF91 reach production remains to be seen. After all, Faraday Future stated a few months ago that it needs in excess of $300 million in order to “continue operations”.