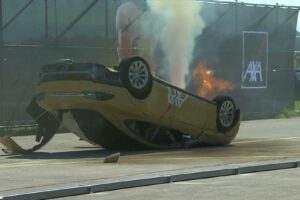 Earlier this week, we told you about AXA Insurance company’s Tesla crash test. Essentially, the company crashed an older Tesla Model S, which flipped over and burst into flames. The point was to show that EV batteries could catch fire if the undercarriage of the car gets scraped. Now, AXA has issued a lengthy written apology, which it posted on its website.

While AXA’s intentions may have been to educate people, the crash tests backfired. The older Tesla Model S was arguably not a good example since there are many much newer EVs to use for such testing. Moreover, the car didn’t actually have a battery pack in it at all.

AXA removed the Model S’ battery pack for safety and replaced it with pyrotechnics. Of course, the car couldn’t operate without the batteries, so the insurance company had to pull it up over a ramp and flip it, simulating a crash. The pyrotechnics made the car instantly burst into flames on its underside.

AXA Switzerland’s apology came in the form of a public letter, which it posted in French. We’ve translated it to share details with you. AXA wrote via Google Translate:

“We regret that the 2022 edition of the crash tests may have conveyed a bad impression of electromobility or created misunderstandings about it. We are convinced that the switch to electric will play a central role in the future of automobile traffic. That is why we believe it is important to take a close look at electromobility and the safety it offers.”

Despite the fact that AXA issued the apology claiming it didn’t mean to mislead people, and going on to say that it believes in the future of EVs, it then proceeded to defend itself and further amplify the negatives related to electric vehicles.

According to AXA Switzerland, EV owners are responsible for 50 percent more damage-causing accidents than gas-powered cars. The insurance company notes that since EVs are more powerful vehicles, they’re more likely to cause damage. As an insurance company, AXA believes part of its job is to share this data with the public to encourage safety.

AXA makes it clear that it didn’t think the simulated crash tests would cause such a stir, though people we weren’t on-site at the tests weren’t as familiar with the scenario and situation. When such a video is posted online, it gets shared around amid misinformation, and sort of starts its own fire.

The insurance company admits that in retrospect, it could have and should have carried out the tests differently. It reiterated that the press release made it clear that EVs are “no more prone to fire than conventional combustion vehicles. Nevertheless, we must recognize that the published images give a different impression when taken out of context.”

As always, head down to our popular comment section and let us know what you think. Do you agree or disagree with AXA’s decision to record and share footage of a fake battery fire? Do you think the insurance company was right to issue an apology?